In Broadside, what is your strategy for placing the shore guns and mines during setup?

I was recently reminded of the childhood naval game Broadside. As the defender, you get to place four shore guns and six mines during the setup phase, one on either side of two channels. 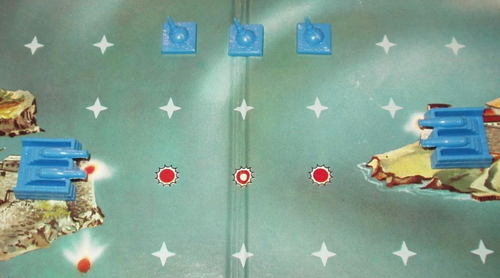 The channels are choke points that the attackers ships have to pass through to be able to win the game; one is close to the attacking fleet starting location and represents a direct path to the merchant ships they need to sink to win the game, while the other channel is out of their way.

The trick is that two of the guns are useless decoys, while the other two get a free shot on any ships that passes within range, and three of the mines can destroy an entire ship, while the other three are duds.

Does anyone who remembers this game ever develop a strategy for how to place these static defensive units, and if so, how did that change how you deployed your blue fleet once the game started?

As I remember, the British fleet had 25 sails, the American only 20. But the guns and mines more than make up for it, for the Americans. Inevitably, the British ships lost sails to the guns. One or two would also hit a "live" mine.

This was decades ago for me but I remember that I would send a cutter through the middle where both guns would shoot. If both were there I lost 1 sail and if none I was through clear.

Not the answer you're looking for? Browse other questions tagged broadside or ask your own question.

1
In Broadside, what methods are most effective for probing and/or circumventing the fixed defenses?

1
In Broadside, what methods are most effective for probing and/or circumventing the fixed defenses?