In the Lithuanian historical museum is an old piece of wood with a scratched game board.

The game board consists of a square grid with five lines in each (horizontal and vertical) direction. There are also lines from each corner of the grid to the opposite corner, and lines between the midpoints of the outside of the grid.

Pieces are placed on the intersections of lines.

Does someone know the name of this game?

From your description, it sounds like you're describing the game-board for Qirkat, which is a precursor to Checkers/Draughts: 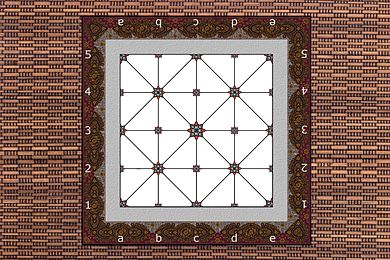 There are many games which use this or a similar board (this Wikipedia link lists some of them), but neither Qirkat nor any of the variants I know have a uniquely Lithuanian origin.

As far as I understand, this type of game board was rather wide-spread throughout medieval Europe, although exactly what games were played on them isn't so clear from country to country. Without, for example, pieces or instructions, both of which are generally harder to find in the archeological record, it's mostly a matter of speculation.