If I play a "Stealth Tower" base on my turn, can it copy a base that my opponent still has in play? The text says any base in play, but are your opponents bases considered in play during your turn? 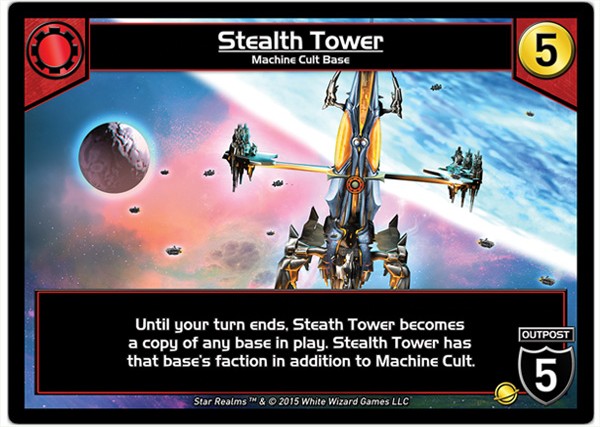 Your opponents bases are In Play so Stealth Tower can copy them too.

After Stealth Tower copies a base, it remains a copy of that base regardless of what happens to the original (destroyed or returned to hand, etc).

This relies on an understanding of what "In Play" means in the context of this game.

At any time during your Main Phase you may perform any of the following actions, in any order you wish.

Playing Cards: There is no cost to play a card, simply place it in-play (face-up on the table in front of you [the active player]). There are two types of cards you can have in your deck: Ships and Bases.

Bases: Unlike Ships, Bases are not discarded at the end of the turn. Instead, they remain in-play until they are destroyed or scrapped.

In the Main Phase the first action says you can play cards from your hand. Playing a card involves putting the card from your hand in-play in front of you. During the Discard Phase all in-play Ships are discarded, but Bases (and Outposts, which are Bases) remain in-play. Therefore Bases Played by any player are in-play, even after their turn ends.

Not the answer you're looking for? Browse other questions tagged star-realms .

6
Are there any rules in Star Realms for when you have no deck?
5
Star Realms: scrapping a card in your hand
5
Can you use a base's ability twice by returning it to your hand with Mega Mech?
7
Does it matter what faction Mech World is?