How are the Utilities unmortgaged with 10% interest if the mortgage value is $75?

In order to lift the mortgage, the owner must pay the Bank the amount of the mortgage plus 10% interest

There is no official rule to address this question, so you and your play group must decide how to handle it.

Note that the same question applies in the case of landing on the Income Tax square and choosing to pay 10% of your worth.

A common thing that would make sense is to follow the same rules of rounding that is taught in most basic math... 1/2 and higher means round up, lower than 1/2 means round down. So 7.5 would round up to 8.

Because Monopoly is a game designed to simulate handling money, involving banking and such, it might make the most sense to use what is called "Banker's Rounding", which is also known as "Round to even". This means that 7.5 would become 8, but 10.5 would become 10. In other words, when dealing with 1/2, round to whichever direction would leave you with an even number. 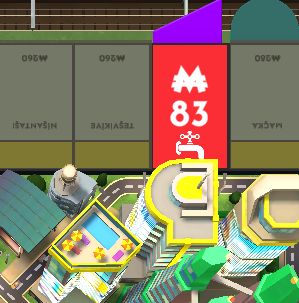 in the official monopoly game, based on the rule "numbers ending in 5 are rounded up", utilities unmortgage value accepted 83M

29
What happens when you need to tear-down a hotel but no houses are in the bank in Monopoly?
16
Monopoly: Strategy in trading --how do I compute the expected value of a trade?
10
Why isn't the minimum bid for a property its mortgage value?
14
If I own both Utilities but mortgage one, do I get 10x or 4x the die roll in rent from the unmortgaged one?
25
Are the utilities worth buying?
9
Monopoly houses bidding?
6
In Monopoly, Can I mortgage the property I land on in order raise sufficient funds for its purchase?
0
Are double rolls added when you land on the utilities?
6
In what order are several properties auctioned by the bank?
5
Do you receive the Mortgage value of a property every turn?