Handling multiple “timers” on the board and player mat

The game I'm working on might feature a number of "timed" events, such as:

For ease of use, one's timers only tick at the beginning of one's turn, which is also when they get action points.

What could be some intuitive mechanisms to model these, preferrably in a unified way, that's not easy to forget or tedious? Bonus points if it blends in with an action point pool of varying size.

I plan on using timers around the 1-10 range, but they could be found in all sorts of areas, as I've said.

There are several ways to implement timers in board games

Not sure if this is the right way to offer a suggestion I have thought of myself for feedback, but...

Labelled 0-5 or so, various items are put on the time bar, and everything is brought one step down at the beginning of my turn. Normally, most of my action points are just set at "1" when used, to be regained next turn. However... 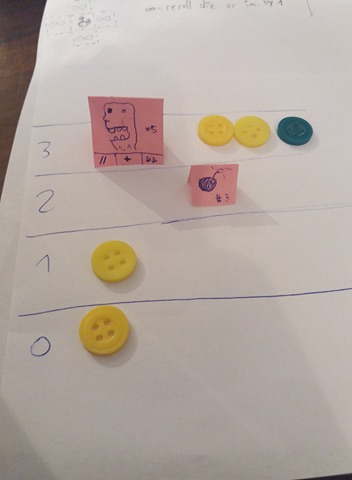 In this case, the player has taken some more complex actions and placed tagged (#3, #5) duplicate time-tokens on the bar.

He has summoned a decaying zombie (a duplicate of which is placed on the timebar, the original being on the board), which took two AP and one "ultimate" point to cooldown 3 (thus locking in both ability power and acting power to buy some temporary forces). The zombie being on cooldown 3 means it will die upon reaching 0. The player will also regain the powerful special token upon the spell's cooldown.

The player has also dropped a bomb (somewhere on the board. A duplicate is on the timebar) which will explode in 2 turns. This costed him just one action point. Bomb #3 will explode on the board upon its time-token reaching 0.

The player has one more AP this turn, which can be used to move, attack or throw another bomb.

I've developed a full engine out of this, and essentially you only need numbered tokens on the bar to represent situations to handle on the board.

I would recommend building your own timer out of something like card stock with spinning wheel, something similar to the design below (pardon the MSPaint):

The Bottom layer:
The base of the Timer, it holds everything else.
The Middle Layer:
It has four support posts in the corners and a central wheel that can spin freely. The wheel has been subdivided into 8 sections with the number 8-0 printed on, you can subdivide it further if you wish.
The Top layer:
It has a small notch in the bottom to allow you to easily spin the wheel. It has also been subdivided into 8 sections, each section has a little window cut into it so that you can see the numerals on the wheel beneath.

How to use the wheel:
Say you want something to happen in three turns, the player would simply place a token or marker on the wheel where the three currently is. At the beginning of each turn simply turn the wheel one mark clockwise, when the marker is next to the number 0, 3 turns have passed and the effect will happen. This has the advantage of letting the player keep track of multiple different cooldowns, without having to move a whole bunch of tokens on a timeline each turn.

Building on the timeline answer: If you have a board already, put a timeline around the edges - a strip of squares/hexagons/triangles representing turns. Each box that can hold tokens that indicate that certain events will happen which this turn is reached. (Any actions that occur every n-turns, regardless of game play, can be directly printed on the board.)

Another token shows which turn it is now, and is progressed by one each turn, sweeping up the tokens as it goes. When it gets to the end of the board, it can wrap around [which means there is a limit to how far in the future you can plan, but no limit to how long the game can last]

This has the benefits of:

Not the answer you're looking for? Browse other questions tagged game-design mechanics prototyping turn-order or ask your own question.

16
Is there an online platform for collaborative development of a board game?
7
Is there an easy, web based, multi player board and card game prototype tester?
1
magnetic mat for card sorting game
5
Board games involving players' consensus for who wins?
3
Rialto starting player and initial order on Doge track