Adventure board game I had as a kid

My parents years ago cleaned the house and donated a lot of things that didn't see use, one of them was this game, never saw use because I didn't have a play group the right size.

I remember it being a village with a castle on one end, the buildings and castle were cardboard forms, the village buildings would come off the board when players entered. I remember the game had expansion potential, you could buy another board that would play inside the castle, and I believe another one that would be before the village (seem to remember this being a bridge) though I don't know much about either.

The most notable thing about the game for me was the initiative system, the player characters and the one enemy player would each be a color and in the middle of the town was a clock/monolith, with colored balls. You would take that off the map, shake it to mix the balls and put it back to determine turn order.

The game was in English, in North America. The figures were plastic/resin for the player characters, and weapon items would slot into their hands like how action figures worked. I remember some of the weapons were in a gold colored plastic, the others I think were grey. Each player also had a plastic tray to hold inventory (extra weapons and potions are all I remember) and money. I do not remember if monsters were plastic or standees, though I remember their bases had space to put little cardboard tiles to mark what the monster drops on death.

Malco guided me to a list of possible answers on BoardGameGeek and I found the game there.

The game is called Dark World: Village of Fear. It is an expansion to the original Dark World, which is the inside of the castle, and can be played stand alone or connected to Dark World. The other expansion with the bridge is Dark World: Dragon's Gate. The game is originally German, a spin off of the Dark Eye (Das Schwarze Auge) role playing system.

The initiative clock/monolith I mentioned: 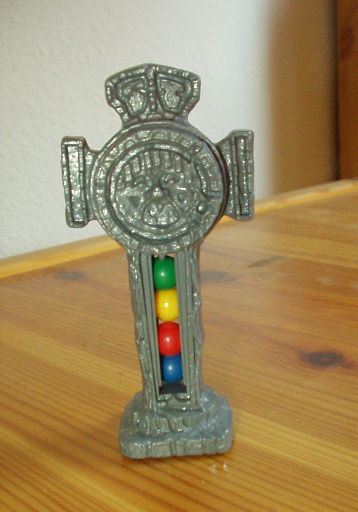