Difference between a knight and a meeple

What is the difference between a knight and a meeple in carcassonne? What about the big Meeple? Can he count as a knight?

The meeples are any of the roles in the game. Knight, thief, farmer or monk. The big one counts as two.

A meeple is a humanoid-shaped physical object.

You will find in the box 40 regular meeples, including 8 meeples in each of these colors: yellow, red, green, blue, and black. 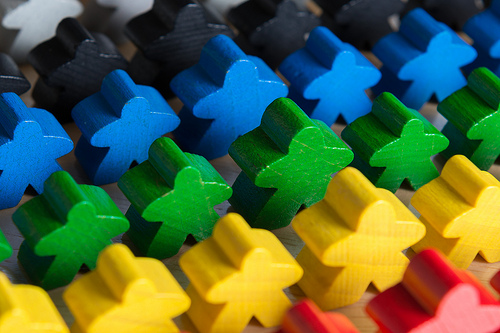 They were called "followers" in earlier versions of the game/rules.

"Knight" is one of the roles the meeple can occupy. A meeple in a city is called a knight.

Placing a meeple as a knight

Other roles include highwayman (on a road), monk (in a monastary) and farmer (in a field).

22
Carcassonne — problem telling the difference between the Big Meeple and regular Meeples
5
Questions about pigs
7
In Carcassonne, how does the Bazaar play and count in different situations?
5
How many meeples should I have according to the expansions that I'm currently using?
5
Does the mayor count as multiple knights during taxes?
1
With Carcasonne crop circles expansion, which meeples count as followers?
12
Carcassonne interaction between “The Robbers” and “The Messages”
3
Can I move the fairie on a bonus turn due to the builder?
2
Can you place a meeple on a tile you didn't place?
0
Is there a canonical way of placing the scoring meeple to signify having gone round the scoring track?