I remember a friend of mine was trying to get me to implement this as a computer game. It came about around 2002-2006. Terrain pieces were stackable plastic hex pieces. Figures were similarly on hex pads, and had a series of stats. There were Ranged and melee attacks defined. Ranged attacks involved line of sight and measured distance from the tip of the weapon to a "vulnerable area" on the figure (shown in kind of a two color front and profile views on the associated chart). Characters had a mix of technology and magic (I remember one figure having a military rifle and a magic sword) and might have been drawn from different dimensions. There were some goblinoid characters also, I remember. And... that's most of what I remember at the moment, but it's bugging me.

I had a sudden inspiration and looked at an archived copy of a USB stick I carried back then and found the rules PDF. It was Heroscape. 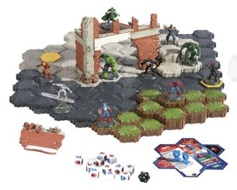 Heroscape (stylized as "heroScape" or "HeroScape") is an expandable turn-based miniature wargaming system originally manufactured by Milton Bradley Company, and later by Wizards of the Coast, both subsidiaries of Hasbro, Inc., and discontinued by Hasbro in November 2010. The game is played using pre-painted miniature figures on a board made from interlocking hexagonal tiles that allow for construction of a large variety of 3D playing boards. The game is often noted and lauded by fans for the relatively high production quality of the game materials, in particular the pre-painted miniature figures as well as its interchangeable and variable landscape system.

7
What's the name of this board game about a Middle East oil war?
12
Identify board game on 4x4 board with 8 black and 8 white pieces
1
Identify this strategic, war board & card game about Italy (not Carcassonne)?
7
What is this game with two boards and pieces numbered 1-15?
4
What is the name of this fantasy game with cards and little treasure counters?
5
Please identify this game - 4x4 diagonal squares, 4 red and 4 blue pieces - nice wooden board
7
Help identify a ~1984-1986, D&D-ish, chit/card + dice, battle game
5
What is this Old French Game board with 10x10 squares and dark and light circular pieces?
4
What is this board game with black & white pieces and criss-crossing lines called? or how is it played?
1
Heroic fantasy god game