Do I play a hero's ability every time I draw it?

When I buy a hero and put it into my discard deck, then shuffle it and draw it in my hand in a later round, do I always have to / get to play the hero's ability?

For example, each time I draw Seer of the Forked Path, do I get to draw an additional card from my deck? 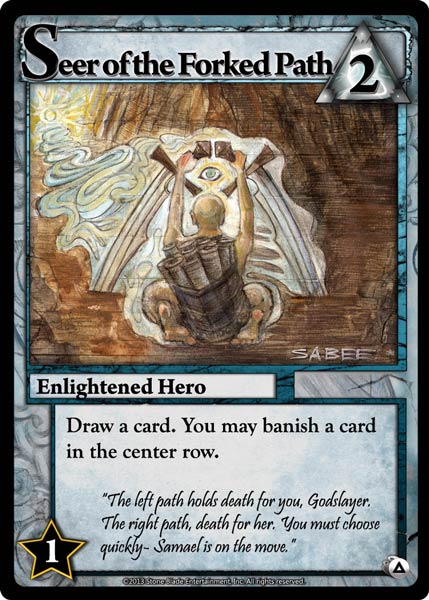 In Ascension you only ever use a hero's ability when you play the card. So in your case when you draw the Seer of the Forked Path nothing happens. However on your turn if you play that card you will draw an additional card and get the choice of banishing a card in the center row. The fact that the ability only happens when you chose to play the card is important because there are times when you do not want to activate a hero's ability because it has a drawback that you don't want to encounter.

If you look at the rules it describes what every area of the card does and for the area where the ability is it says:

What the hero does when you play it

It should be noted that constructs unlike heroes stay in play and the effect happens every turn (though some of the abilities you have to chose to activate).

As a side note cards with the ability to draw other cards are generally pretty powerful and are good ones to look to acquire.

Every turn consists of playing whatever cards from your hand that you want. There is no limit to how many cards you can play; and you never have to play a card if you don't want to. So if it is in your hand, you can choose to play it.

Monster effects are triggered when you defeat the monster, they happen once and the monster goes to the void.

Constructs specify when their effects trigger, usually once per round, or when you play specific faction cards (like another mechana construct).

3
what is "the next time in this round" in Ascension?
3
Draw a card when my deck and my discard piles are empty
2
Is there a best time to play Tablet of Time's Dawn?