Want to improve this question? Update the question so it's on-topic for Board & Card Games Stack Exchange.

Are there any board or card games with changing goals?

Before you answer real quick saying "yes", let me define what I mean. When I say change goal, I mean that the player works towards that goal not future goals. That means they aren't trying to be the final victor. They are trying to achieve what they have been assigned right now. The best way to illustrate would be some examples.

A game designed where the rules and goals are constantly changing. You can be working towards a specific goal with collecting keepers, only to have your opponent remove the goal and change it for something else. There are many different editions of Fluxx, the later ones introduced new cards like surprises.

You can also have rules that allow for more than one goal, rules that modify how the goal can be won, different methods of winning.

Generally you will always win by having the cards that the goal requires (Or making sure your opponents have the cards you don't need). In some of the later games (Post Zombie Fluxx), there are also ungoals that if achieved, means everybody loses and the game wins instead. 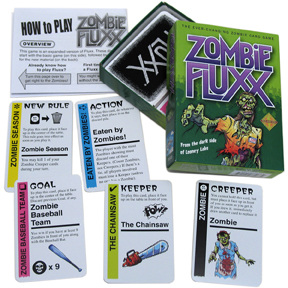 There are many games that sort of qualify, but none that perfectly match your criteria

Draken already mentioned this one, and it is the most obvious choice. Goals change constantly. But it is possible to work towards a future goal. Goals in play are fleeting, but you can hold a goal in your hand for far longer. I generally would hold promising goals in my hand while working towards them, and only play them when I could win instantly.

There are many other cases with similar mechanics, but the new goals never override previous goals - they just add new ways to earn points.

You specifically excluded traitor mechanic games, but I'm including them anyways for completion. There are a number of traitor mechanic games where it becomes possible to become the traitor half way through the game. In theory you could play with this possibility in mind, but my experience is that in practice people don't, because the game is weighted in the traitor's favor and the odds of becoming one are low, so players are too busy keeping their heads above the water to worry about such things.

This is technically another traitor mechanic game, but I'm listing it separately because Betrayal is scenario based. While everyone knows that someone will become the traitor, it's impossible to know what the traitor's goals will be. It's still not a perfect fit, though, because until the Haunt begins and the traitor is chosen, there is no goal at all, so the game never has more than one goal per sitting.

Why are there only imperfect examples?

From a design perspective, a game whose goals change in ways that can't be anticipated is generally unfun. If you can't achieve the first goal before the goal shifts to something else, then all the work you've put towards the first goal is wasted. When the goal switches, how much progress each player has towards winning is reset essentially at random, which is particularly frustrating to anyone who was ahead before and is now behind, and may be unfulfilling to someone who goes from being behind to ahead through no fault of their own.

Creating a fun strategic game with a shifting, unpredictable goal is extremely difficult, verging on the impossible.

16
What is this game with multiplying aliens and random weapons?
10
What is the name of this marble game?
14
Help me identify this card game with secret, changing rules
5
A board game with astronauts?
4
Help identify card game with teams and secret signals?
7
What is this deception-based party game?
5
A multiplayer board game catching eggs down a chute with a cart
3
2-player Lord of the Rings game from the early 2000s
4
Simplistic Area Control Board Game with Discs