This is on the back of a board for French Chequers called Jeu de Dames. I have found out that it is possibly from the mid 19th century! 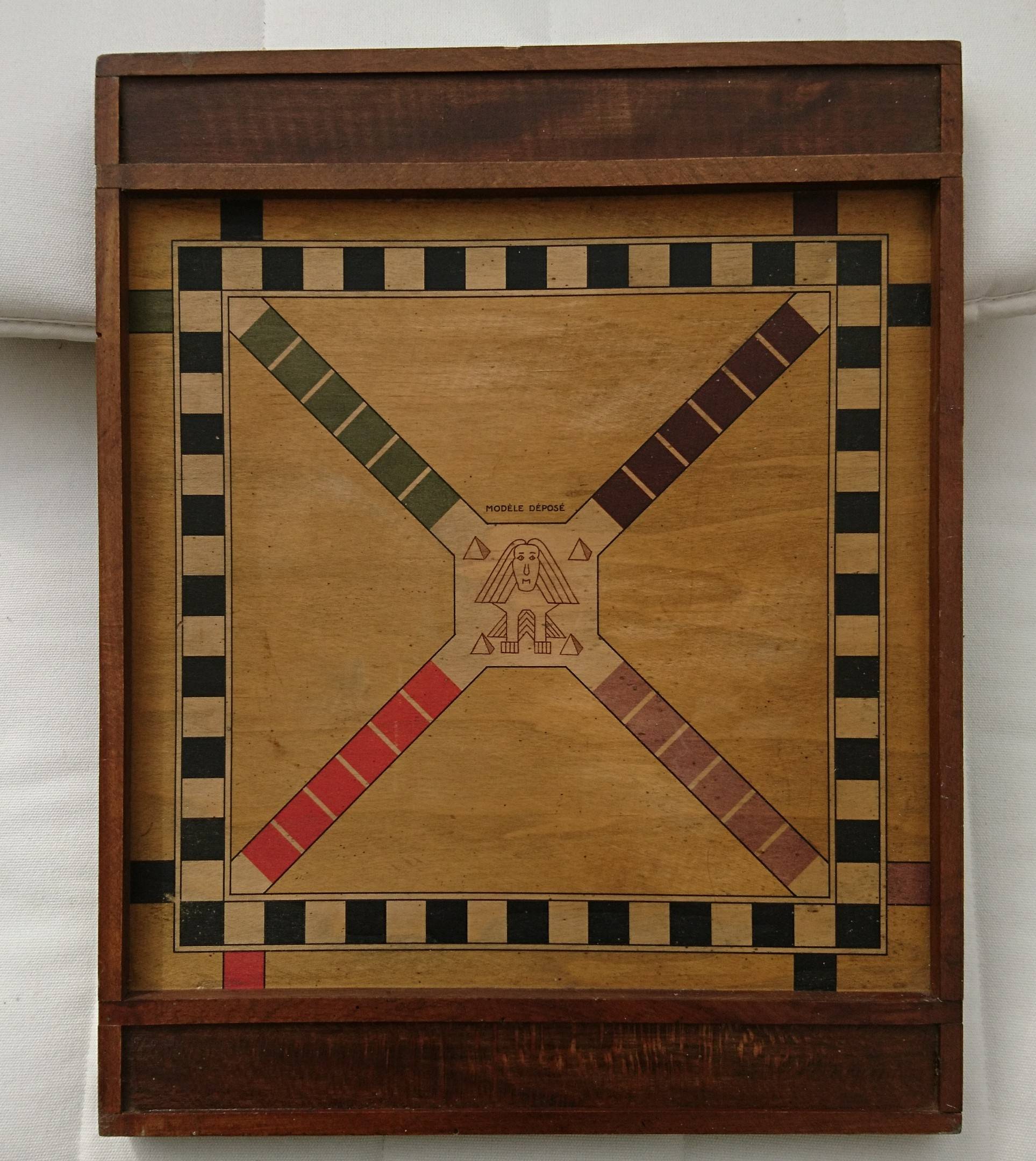 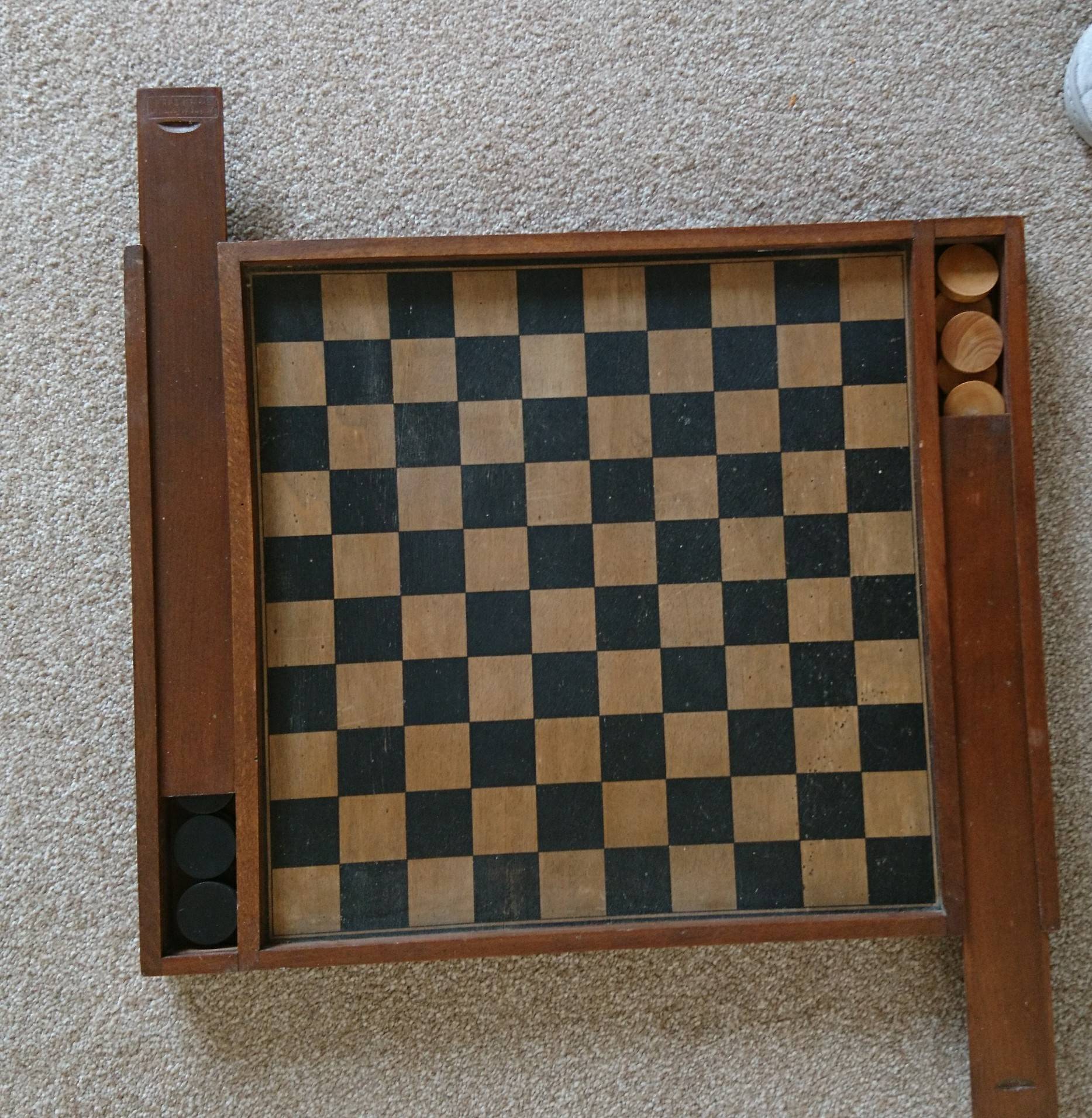 This is clearly an Egyptian themed version of the French Ludo variant known as Jeu des petits chevaux. (Link goes to the sensible French Wikipedia entry. Note that the corresponding English Wikipedia entry only describes a casino game that may or may not have been played on the same board.)

We can see that it was probably a version with 6 pieces per person (rather than the usual 4), as is typical for this French Ludo/Pachisi variant. The board layout is geometrically non-standard, with the main path following the edge of the board rather than closely wrapped around the four home columns. This allows the home columns to be arranged diagonally and so frees up the space for the sphinx in the middle, which I guess was purely ornamental. (Although there may have been special rules making use of the central field.)

Of the eight squares outside the main path, four are black. I suspect that they are purely decorative - for symmetry with the coloured squares. The placement of the coloured squares supports a counter-clockwise direction of play as was traditional for the original Indian Pachisi game as well as the former French national card game Tarot. The historical playing board displayed in the Wikipedia articles also has this playing direction.

Regarding the age of this board, I can only speculate with very little foundation. But the words "modèle déposé" ("registered design") suggest to me that it's actually from the 20th century. Earliest years for the game given in the French Wikipedia article are 1911 for a mention of the casino game (which may be unrelated, after all) and 1936 for the family game. On the other hand, I can't rule out that registered designs for games already existed in France in the 19th century and that the Wikipedia information is inaccurate.

PS: Robert Miller has added an alternative answer that I think is only slightly less plausible than mine. What they both have in common is that they interpret this game as a European Pachisi variant. An argument in favour of my answer is that it explains why there are 6 houses rather than the usual 4. An argument in favour of Robert Miller's answer is that it explains the unusual overall layout. It is of course possible that the present game was influenced both by the Jeu des petits chevaux (in terms of mechanism?) and by the Chinesenspiel (in terms of layout). In any case, both answers involve some reasonable speculation, which is inevitable until someone finds a book describing this precise board, or even an original box with instructions.

The game Chinesenspiel is a 19th century German game of the Pachisi family.

Note. Obviously, because of the mention «MODÈLE DÉPOSÉ», the one in the question is a French or Swiss production. 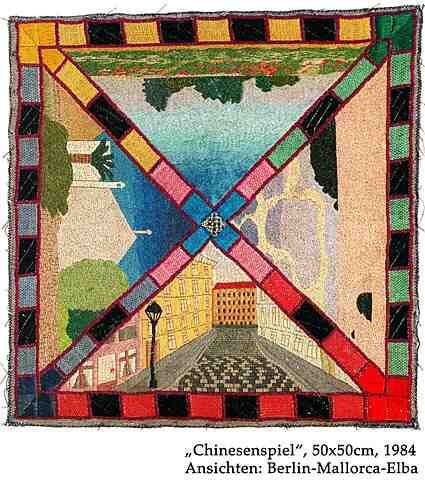 It is a random luck game. Each player has a single piece of a unique colour. A six-sided die is used, with the four colours on the board each represented by a coloured square on one of the die faces. The 2 unused die faces are white.

Start of game. Each player places their piece on one of the 4 coloured corner squares (not the black ones).

Gameplay. Pieces move around the board on the outside track in a counter-clockwise direction. A piece must go all the way around the board and finally go up the diagonal of the player's assigned colour in order to reach the center. The first player whose piece reaches the centre, wins.

When a piece reaches a square occupied by another player's piece, the active player's piece moves ahead to the first free square.

5
What board game for 2 to 4 players with 1 token each and the winner is the first to the top of a raised platform?

4
What is the French card game Paquet Voleur called in English?
7
A board game called PALM BEACH or something to that effect
3
Name of empire building game with negotiated alliances?
6
1932 Finance board game
5
Safari / ecology childs board game, collecting animal cards
5
Space version of a monopoly like game?
5
What is this Old French Game board with 10x10 squares and dark and light circular pieces?
8
What is the name of this pyramid game?