What is the correct opening move in mancala when you go first in a 6 hole per side board?

Obviously the first thing you want to do is get the bonus turn. But I'm confused after that. You don't want to do your 4th hole from the left because that would allow your opponent to get 2 bonus moves. I also imagine you wouldn't want to do either of your 2 on the far left because you could use those for captures or maybe extra moves later. I'm assuming you would probably choose the 5th hole from the left as your last hole is much harder to capture and better to use for around the board captures.

Is my logic anywhere near correct? What is the preferred opening in Mancala to maximize your chance of winning? 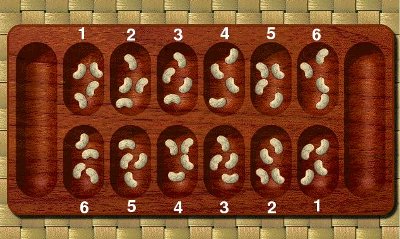 This site suggests third-from-the-left (your 4) followed by far-right (your 1).

This opening has the following strengths:

They go into a considerable amount of detail explaining subsequent moves, analysis, and their conclusions: I would definitely recommend reading the entire page to understand it better.

Not the answer you're looking for? Browse other questions tagged openings mancala .

9
Good opening questions for Adventurers in Are You the Traitor?
6
What different opening strategy exist when playing Quatro?
6
What is the best opening in Hansa Teutonica?
12
What is a good opening for Go on a 13x13 board?
2
In Axis and Allies, When (and How) Would You Adjust Your Opening Strategy?
8
What is the largest amount of pebbles in mancala to win with?
6
What are the rules for playing with this unusual Mancala board?
3
What is an extra move in Mancala, and can you have more than one?
0
Can you "steal" if the last piece lands in the hole it came from?
5
In Mancala, can you pick up the stones if your last stone lands in a hole that isn't empty?