We dug out my old X-Files CCG cards to play tonight, and in the process of playing, came across the card "Women's Health Clinic, Richville, MD".

Sites have keywords, which other cards can then play against. This card has the keywords Site, Mono, Result, Subterfuge, but lets you ask a Motive question. In the base set as well as the first expansion, if a site had Motive as the question, it would have Motive in its set of keywords.

Here is a sample of a site that makes sense (picture is a little blurry): 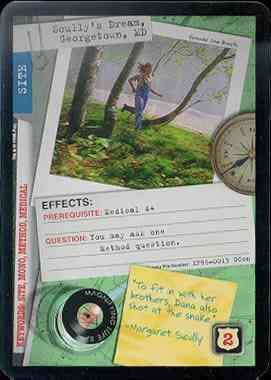 However, the "Women's Health Clinic, Richville, MD" card has Result as a keyword, but you can ask a Motive question. I can either assume 1 of 3 things:

We played the card as printed (you can ask a Motive question, but Result cards can be played on it), but the card threw us for a loop. Does anyone have any information if this is actually a typo of sorts, or by design?

Your logic is undeniable, and it seems by all accounts to be a mistake.

ALL other cards that allows questions have the question type as a keyword. Seems like this one slipped through their fingers.

Not the answer you're looking for? Browse other questions tagged x-files-ccg or ask your own question.