What’s the name of this three row solitaire?

Start building three rows/piles, one card at a time in each. When three adjacent cards in the same row together add to 10, 20 or 30, remove them and put them in the bottom of the draw pile (in your hand). If you empty a row entirely, don’t put any more cards in it. The goal is to empty all three rows, thus having all 52 cards in your hand.

IRL this game sometimes uses an entire table, so it’s better to play electronically. I had it in my computer some 20 years aco, but don’t remember the name and haven’t been able find it again. Anyone here who recognises it and can help me?

The solitaire game you are looking for is a variant of 10-20-30 (ten-twenty-thirty), but with only 3 tableau piles (instead of the standard 7 tableau piles).

10-20-30 is itself a variant of Decade and it also in some meaning resembles Accordion.

A description of the game from Duke University
https://users.cs.duke.edu/~ola/courses/cps149/problems/week2/solitaire.html

A simple solitaire card game called 10-20-30 uses a standard deck of 52 playing cards in which suit is irrelevant. The value of a face card (king, queen, jack) is 10. The value of an ace is one. The value of each of the other cards is the face value of the card (2, 3, 4, etc.). Cards are dealt from the top of the deck. You begin by dealing out seven cards, left to right forming seven piles. After playing a card on the rightmost pile, the next pile upon which you play a card is the leftmost pile.

For each card placed on a pile, check that pile to see if one of the following three card combinations totals 10, 20, or 30.

If so, pick up the three cards and place them on the bottom of the deck. For this problem, always check the pile in the order just described. Collect the cards in the order they appear on the pile and put them at the bottom of the deck. Picking up three cards may expose three more cards that can be picked up. If so, pick them up. Continue until no more sets of three can be picked up from the pile. 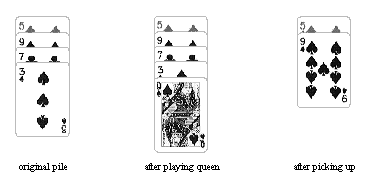 If a pile contains only three cards when the three sum to 10, 20, or 30, then the pile "disappears" when the cards are picked up. That is, subsequent play skips over the position that the now-empty pile occupied. You win if all the piles disappear. You lose if you are unable to deal a card. It is also possible to have a draw if neither of the previous two conditions ever occurs.

Not the answer you're looking for? Browse other questions tagged identify-this-game solitaire or ask your own question.