Does Hallowed Burial search all libraries for creature cards and put them on the bottom too?

Looks like most things I've read just assume it's only from the battlefield but the wording says all creatures. Does "all creatures" always only refer to active creatures because they're not creatures until in play, just creature cards?

“Creatures” (and “creature”) specifically means a creature permanent on the battlefield. So it will not affect creature cards anywhere else.

609.2. Effects apply only to permanents unless the instruction’s text states otherwise or they clearly can apply only to objects in one or more other zones.

In order to refer to objects in other zones; an effect would specifically use the word “card” and specify the zone. See Birthing Pod for an example.

You are exactly right, a creature card is a 'card.'

A creature card being played, after mana has been paid and any other costs is a spell being cast.

A creature spell on the stack, before it resolves, is not a creature yet.

A player who has priority may cast a creature card from his or her hand during a main phase of his or her turn when the stack is empty. Casting a creature as a spell uses the stack. (See rule 601, “Casting Spells.”) 302.2.

Once it resolves, it is a permanent. A 'creature' permanent.

Once the spell resolves, ie everyone passed priority and let it resolve, it is now a 'creature' on the battlefield. These are the 'Creatures' that Hallowed Burial refers to. 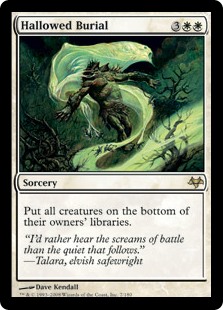 Other answers have touched on this, but I think it needs to be more explicit: cards with the word "creature" on them are creature cards. They are not creatures. When they are cast, they summon a creature to the battlefield. The creature card is then used to represent the creature.

Cards and rules are sometimes loose about referring to a card and the entity it represents interchangeably, but there are never any creatures in the graveyard, only creature cards. You can see this in the wording of cards that bring things out of the graveyard, e.g.

5
How exactly does Xenograft work, and not work?
0
questions about shapesharer
0
Blocking with First Strike + Deathtouch
0
Creature fights target creature
2
How do costs to attack work?
4
Do the rules 720.3 and 720.5 contradict each other?
2
Can I survive every enchantment, creature, and artifact in the game entering the battlefield at the same time?
0
How do Butcher of Malakir and Extractor Demon interact with Barter in Blood?