Why don't ground-types (fighting) in Pokemon TCG have resistance to electric?

I don't play the Pokemon TCG, and most of my exposure comes from collecting cards from the first three sets when I was a kid (which I've long since gotten rid of). I decided recently to pick up a couple starter decks I saw in the store (the relevant one to this question being Mewtwo Mayhem theme deck) just to see, out of pure curiosity, how far the game has come and how much it has changed. I was looking through the cards and I noticed something odd: the Diglett, Dugtrio and Sandshrew don't have resistance to lightning, despite this resistance being a staple for ground-types. Here's the Sandshrew card pictured for reference:

Pokémon Trading Card Game follows original type effectiveness table only loosely. In each generation, there can be found some patterns, like originally Ground Pokémon having Lightning Resistance in earlier generations, but those usually change in time and also some cards can diverge. Some of those patterns were applied according to one of the types of dual-types Pokémon, without regard to the second type.

Let's have Gligar as an example. In the past, there was a pattern of Originally Ground-type Pokémon having Grass Weakness¹. Even though Gligar is damaged normally by Grass and is resistant to Bug and Poison² (types that were represented by TCG Grass type back then), it was printed with such Weakness: 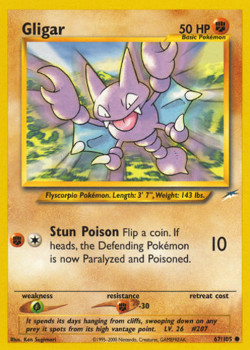 In the past, there was also a pattern of Originally Flying-type Pokémon having Lightning Weakness³. Even though Gligar is immune to Lightning² in games, it was printed with such Weakness: 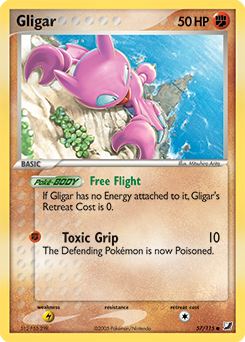 Later, Gligar kept its Water Weakness and Lightning Resistance for a long time, loosing the Resistance during 6th Generation, which is the same for Sandshrew as well. It's possible that card creators changed their patterns recently. You can compare Gligar from 2012 (5th generation) with Gligar from 2014 (6th generation): 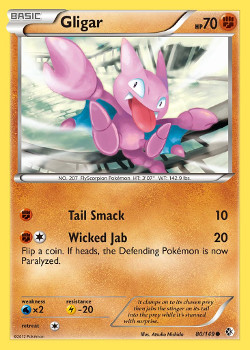 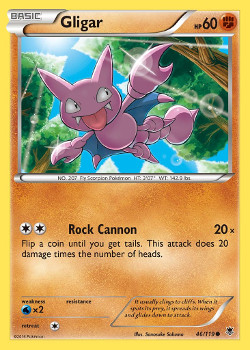 During the 7th generation, Gligar's Weakness changed to Grass once again: 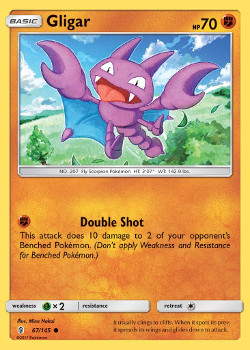 Officially, there is no information about how the conversion from game types to TCG Weaknesses and Resistances work.

5
Pokemon Evolution across types
5
Playing Pokemon TCG with more than two players
2
Why isn't resistance a case of halving any damage taken?
6
What is the definitive source of rulings for the Pokemon TCG?
4
How does the whole EX/GX thing work? (Pokemon TCG)
1
Pokemon TCG: is there a way to remove energy from your own pokemon?
1
Poisoning as an attack in Pokemon TCG
4
Damage using Professor Kukui in Pokemon TCG
1
Pokemon tcg knock out attacks versus effects
3
Pokemon TCG Starting Decks