Maximum number of coins from a tech?

On page 26 of the rulebook it says

Coin tokens placed on a tech card as a reward for accomplishing a certain task are treated just like coins on the map, except that there is a maximum number of times a given task will provide a coin token. Coin tokens advance the economy dial when gained and cannot be lost

Since there are ways to remove a coin token from a tech, how is the maximum number on the tech card interpreted?

The pottery tech card reads max 4. Player A uses this four times (on four different rounds) and gets four coin tokens on it. Player B plays a culture card which enables him to discard a coin token on a technology card, and discards one of the coin tokens from the player A's Pottery card.

Can player A use the ability on the Pottery card fifth time to get a fourth coin token on the tech card? 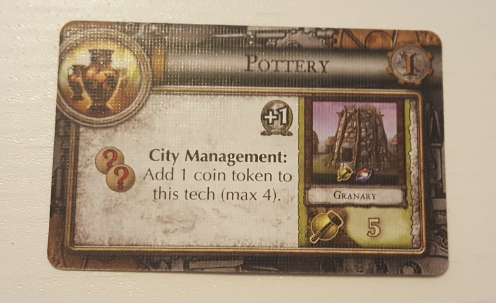 From the Official FAQ v2:

Q: What exactly does “(max 4)” mean on techs such as Democracy, Code of Laws, or Pottery?

A: It means that a player can only have four coin tokens on the Tech card at one time. If a coin token is removed from the card, the player can fulfill the condition on the card to add another coin token to it.

Not the answer you're looking for? Browse other questions tagged civilization-board-game or ask your own question.

9
Who's first in a battle in Sid Meier's Civilization: The Board Game (from 2010)?
15
Too many Tech-Victories seen in 2-player rules for Civilization
2
civ 2 tech writing
0
When exactly do you get the coin from the map in Civilization?