I don't understand the last line of Nature's Way:

It deals damage equal to its power to target creature [...]

Does it mean when I cast this card, one of my creatures gains vigilance and trample and also deals damage (like an instant)? And after this, can I also attack with this creature? 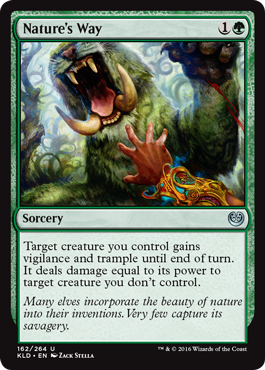 The ability won't cause your creature to tap, so you can still attack with it.

Sort of. Your thinking is correct that Nature's Way is similar to an instant in that it causes damage. If you choose a creature with 3 power as the first target, it would behave similar to a Lightning Bolt.

Can my creature attack afterwards?

27
How does the double strike mechanic interact with other mechanics like lifelink or trample?
22
Does 'fight' involve combat?
3
Does Master of the Wild Hunt deal damage multiple times?
3
How would Master of the Wild Hunt be worded if it targeted multiple creatures?
5
Would Guttersnipe plus a cyphered card result in an infinite loop of damage?
5
Llawanor Elves Trampled on desert Oasis. Act of God or Force of Nature?
0
Creature fights target creature
8
Does first strike damage occur before normal damage?
6
Does a Xantcha I cast trigger a Warstorm Surge I control?
11
Destroying a permanent with ability "as long as this card is on the battlefield"