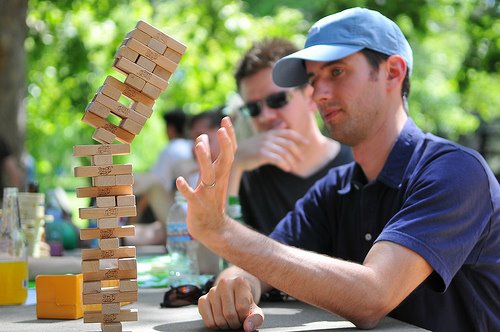 Not the answer you're looking for? Browse other questions tagged jenga .

9
What are the official rules of Jenga?
4
In Jenga, what happens if there are 2 blocks on the top of the tower blocking the way for the 3rd block?
21
Are all jenga blocks of exactly same size?
6
Jenga: When does a player's turn begin?
5
What is the proper way to set up a Jenga tower?
2
Is Jenga a cooperative or competitive game?
6
What is the tallest Jenga tower ever created?
8
What is the mass (or density) of the average Jenga block?
2
In Jenga, how do we define the "highest completed layer"?
3
Can you move some elseâ€™s Jenga piece?