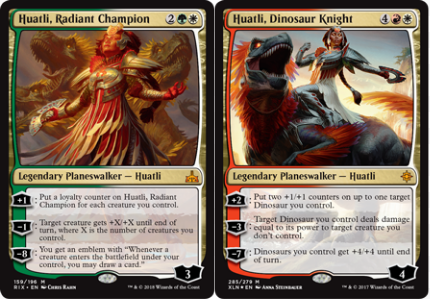 Can I have two versions of Huatli out at the same time even though they are the same planeswalker, just with different names?

Yes, you can have multiple Huatli planeswalkers on the battlefield at a time.

This is a recent change when it comes to magic, but planeswalkers are now Legendary permanents so planeswalker type is no longer considered for determining if it gets to stay on the field.

10
Can multiple Thorncaster Slivers grant multiple copies of the same ability?
2
Can the Planeswalker type be removed from permanents?
8
Can I have two similarly-named legendary creatures on the field?
4
(Dominaria Spoilers) Can the new buy-a-box-promo card deal damage to Planeswalkers?
6
How often can I activate planeswalker abilities with Teferi's emblem?
2
Killing planeswalker before taking out the player?
12
Can I use two different cards with the same name in Commander?
5
How can I collect information on all the MTG decks that have ever been played in standard/type 2?
4
Can I target my own planeswalker with Angrath?