Looking at the notes for Inspiring Statuary, I noticed:

Is this accurate? Is it specific to the Improvise ability or does it go for any # colorless cards (for example Cloudpost)?

Improvise has the following definition in rule 702.125a:

Improvise is a static ability that functions while the spell with improvise is on the stack. “Improvise” means “For each generic mana in this spell’s total cost, you may tap an untapped artifact you control rather than pay that mana.”

A generic mana cost is represented by a number in a circle, and can be paid for with any type of mana. Colored and colorless costs are not generic, so they cannot be paid for with improvise.

Cloudpost is a different matter. Cloudpost adds colorless mana to your mana pool, and that has always been the case. Its current text is

{T}: Add {C} for each Locus on the battlefield.

There is no such thing as generic mana. Any card that is printed as adding {1} to your mana pool actually adds {C}.

Note that explicitly distinguishing between colorless mana symbols and generic mana symbols is a relatively new thing (says I, who hasn't been really actively playing since the original Ravnica, so most rules changes the last ten years seem relatively new to me). This is why many older lands which according to old printings produce what looks like generic mana actually produce colorless mana. Let's look at the Cloudpost you linked: 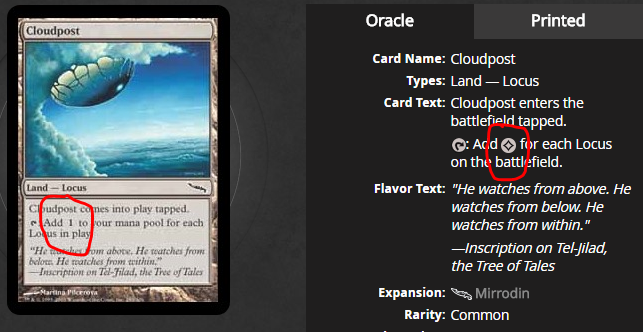 (This copy of) Cloudpost was printed in Mirrodin, long before the distinction was made. Therefore it's printed with a generic mana symbol. However, the card text on the right (which is the current official text legally considered to be printed on the card) uses a colorless mana symbol.

Generic mana is part of a cost, and can be payed with any sort of mana (and is also the part of a mana cost which is most often reduced by various effects like inspire). Colorless mana is mana you can add to and have in your mana pool. It works basically the same way as any coloured mana, in that you tap lands to produce it, and you use it to pay for mana costs signified by either its specific symbol, or by the generic mana symbol.

8
Can Improvise pay for "twobrid" costs?

14
Can colorless mana be generated from things that say "Add one mana of any color to your mana pool"?
12
Is it impossible to pay off-color mana costs in EDH?
5
Can a Colorless commander use cards with the {C} symbol on them?
11
Does devoid make a card's color identity colorless in Commander?
1
Inspiring Statuary = Improvise for Planeswalkers?
1
Can I use Improvise to pay for activated abilities?
6
Hostage Taker + Inspiring Statuary
8
Can Improvise pay for "twobrid" costs?