What sources of damage are not caused by players?

In the character list, it's states in El Gringo description that

Note that Dynamite damages are not caused by any player.

So my question is: there are other cards which damage is not caused by any player?

In BANG! FAQ it's stated that Gatling and Indians! are caused by the player who played them.

Q05. Who is considered to be responsible of the elimination of a player with cards like Indians! and Gatling?

A. Unlike the Dynamite, the player who played the Gatling or the Indians! is considered to be responsible of the elimination of a player. All special actions due to this elimination apply to him (for example, if he just killed an Outlaw this way, he draws the 3 cards reward).

Whenever a player plays a card that instantly deals damage to one of more players, that damage is considered caused by a player. This includes all possible brown cards with a 'bang' symbol.

If the damage is delayed (as it is with dynamite), it is not caused by any player. This is probably partially because it is impractical to keep track of who played it (especially when there are multiple dynamites going around).

That being said, dynamite is the only card in the base game that has this property. Off the top of my head, the card 'Rattlesnake' in the Valley of Shadows expansion is the only other card I know of that has similar behavior. 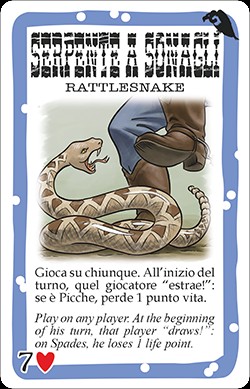 Not the answer you're looking for? Browse other questions tagged bang .

3
Character Specials Triggering on Non Bang Cards?
13
Does Jourdonnais's ability negate all or half of Slab the Killer's attack on a successful draw?
6
How do Rum and Lucky Duke/Horse Shoes interact?
4
BANG! Where do cards played in phase 2 go when "Abandoned Mine" is in effect
4
Bang! 6 Player Problem - It's unbalanced one way or another.
5
Can the last two player heal with beer when Ghost Town is in play?