How can 7NT be played for this hand?

I played a deal online as South and ended up as 3NT +3 (490 points). The deal analysis page indicates that this deal can be played at 7NT.

I retried several times, went straight for 7NT, but all attempts ended up as 7NT -1. West's ♠K is a serious problem that I failed to avoid.

Anyone suggest how this deal can be done at 7NT, with South as the contractor and West plays ♣Q as the first hand?

Note: All other three players are robots and know all cards, so tricking them into thinking the wrong way is impossible. 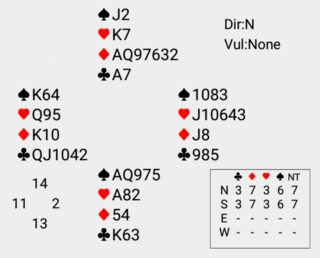 bridge tactics
Share
Improve this question
edited May 11 at 7:36

There is a pentagonal squeeze on this hand. One line of play:

Win the club lead in dummy, cross to hand with the spade ace, take the diamond finesse, and play on diamonds, pitching spades. Eventually, west has to unguard a round suit to keep the spade control, and now you have a double squeeze, with west controlling spades and one round suit, and east controlling both round suits. Cash your hand's winner in the round suit controlled only by east, then return to dummy with the heart king. Now we've gotten to a standard double squeeze position; cash the last diamond, forcing east to unblock one suit, pitching the suit that east keeps. West will be forced to let go the last guard to one of your suits, and your thirteenth trick has materialized.

Here is the 6 card end position after winning ♣ Ace; coming to hand with ♠ Ace; and running ♢ after a successful finesse of ♢ Q:

On the ♢ 3 East and South discard their last ♠ and West must unguard a round suit; establishing the double squeeze. Best defense is for West to pitch a ♡, as if South has ♡ J it's either doubleton, or West was always going to be victim of a successful ♠-♡ simple squeeze. (If West was dealt ♢ J or T instead of ♢ Q he should pitch a ♣ instead. Since South cannot see, or likely read, any of these cards, this option selection should be opaque to Declarer.)

On play of ♢ 2 East now discards ♣ 8 and South must guess the situation. If West is believed to be guarding ♣ (best above) then South must discard ♡ 2 and cash ♡ A and ♡ K in order to squeeze West in both black suits.

If West is believed to be guarding ♡ then South must discard ♣ 6 and cash ♣ K and ♡ K in order to complete the major suit squeeze on West.

Declarer's best bet for reading the situation is that East, whose ♣ attitude to the opening lead is known to all once Dummy comes down, probably gave an honest count signal in ♣'s at trick one. If East is astute enough to have seen the double squeeze coming that early, tip your hat to him as the better man/woman on this day.

Not the answer you're looking for? Browse other questions tagged bridge tactics or ask your own question.

9
In Bridge, Which Forms of Deception Are Ethical? Does This Include “Moodying?”
7
How do I Detect/Defend Against an throw in In Bridge?
5
What is “Playing For Top or Bottom” In Bridge?
3
Can “SWOT” analysis be useful in bridge
5
In bridge, what are exceptions to “third hand high?”
8
Can one ask for a “time out” to study the hand in bridge?
5
Should I reopen this hand?
4
What is the best opening lead on this hand, and why?
1
Honors point count for holding all four aces in one hand?
9
Why is the King of Spades the best opening lead with this hand?