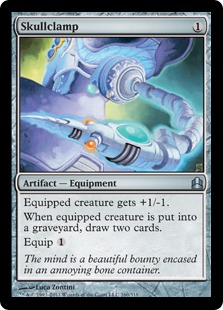 {1}, Sacrifice a creature with toughness 1: Draw two cards. Activate only as a sorcery.

4
How did makers of "Gwent" set scores for each card?
3
Is there a good place to find information about strategies, tricks and caveats for specific cards?

11
Why play Land Grant?
7
Why is Trade Secrets banned in EDH or Commander?
4
MTG: Mutavault - how does it work?
2
Nahiri, the Lithomancer + Skullclamp + Cathar's Crusade
17
Why was Kird Ape banned in very first Extended ban list?
0
Why is the card Earthcraft banned in legacy?
18
Can I equip Skullclamp on a creature I am sacrificing?
10
What happens when two players are both trying to secretly choose the highest number? (Commander Legends spoilers)
22
How do I address the power creep in my pod when I can't afford to keep up? (MTG)