I took an image from another question and roughly repurposed it in paint. Here's my question:

Can a beetle move through gaps that would otherwise restrict a queen/ant/spider? 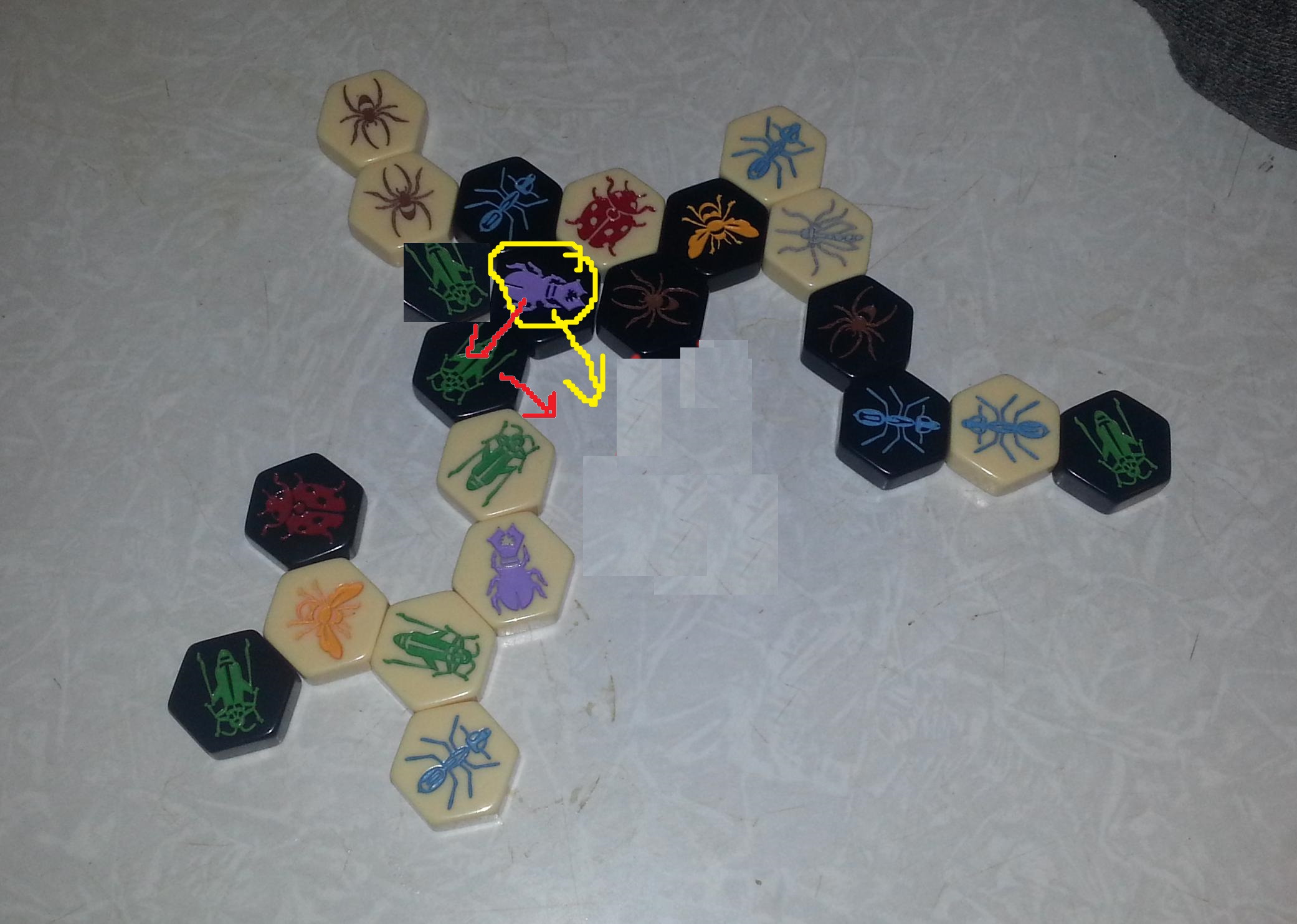 That is, can the circled beetle get to the desired field in 1 move (yellow track), or would he need to first climb over one piece (as illustrated in the red).

If that is legal, it brings me to my follow up question. Could the beetle move in the following way, or would it temporarily break the hive in between transition (1 hive rule) ? 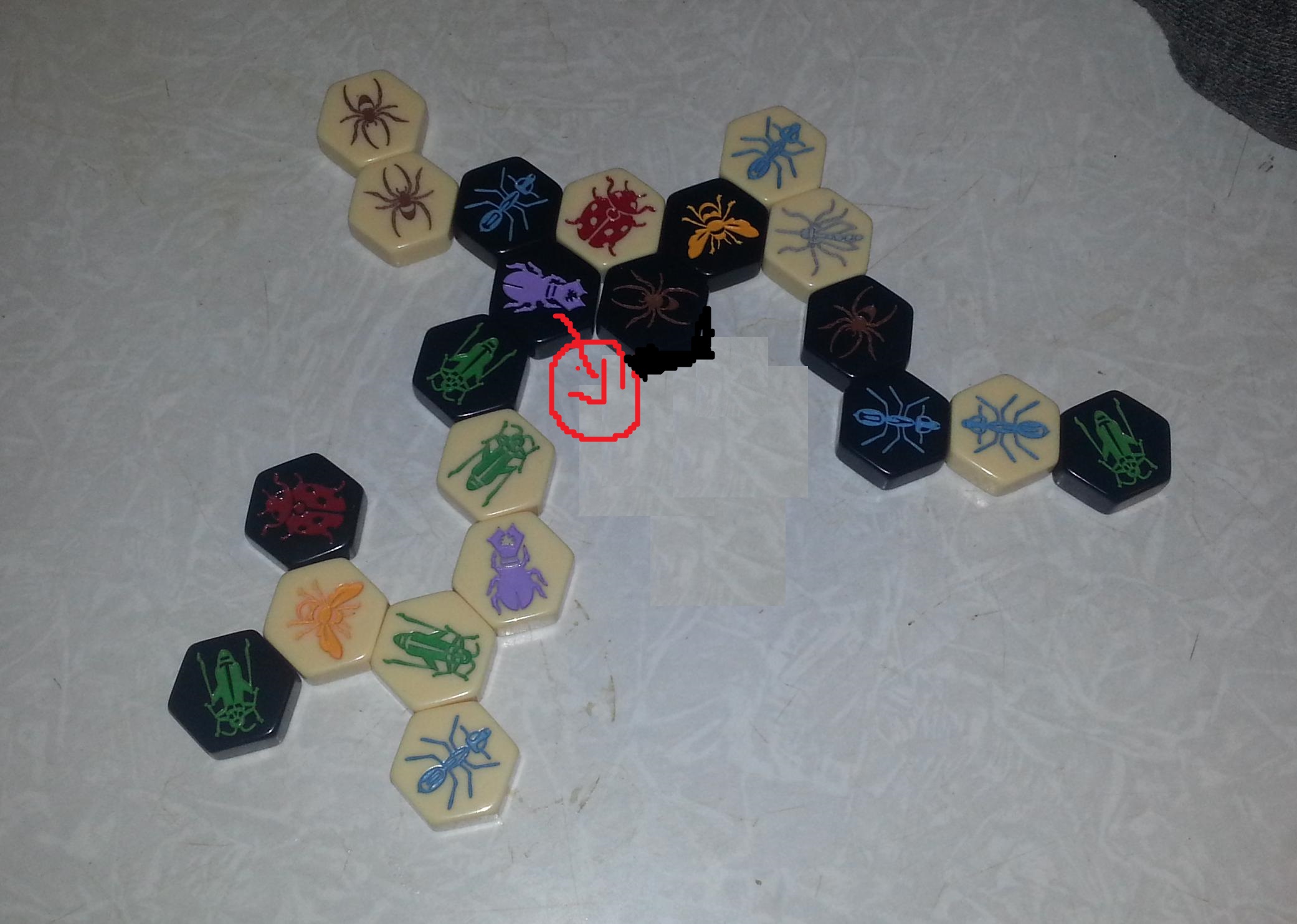 It appears that here, the beetle would be in constant contact with the hive, even though that beetle is clearly the anchor.

Here is a quote from book Play Hive Like a Champion: Strategy, Tactics and Commentary by Randy Ingersoll with foreword by John Yianni, Designer of Hive.

It is pretty clear, that contrary to Steve's answer, the yellow route is not a legal move.

There is also a good discussion of beetle move rules here

From the FAQ on boardgamegeek.com: If a beetle wants to move from A to B by passing between C and D, then check the height of those four spaces (with the Beetle removed) and refer to this validation method:

And note that this method also confirms the red two-move path in the first picture is valid.

From the English rules published by the publisher here:

The Beetle, like the Queen Bee, moves only one space per turn. Unlike any other creature though, it can also move on top of the Hive.

There are further words on what the Beetle does when on top of the Hive, but they're not relevant here.

The creatures can only move in a sliding movement. If a piece is surrounded to the point that it can no longer physically slide out of its position, it may not be moved. The only exceptions are the Grasshopper, which can jump into or out of a space, and the Beetle, which can also climb up or down.

My native English speaker interpretation of that wording is that the Beetle can jump into or out of a space as well as being able to slide. The Beetle can climb up or down, but that doesn't imply it can do both in one turn. Therefore the move in yellow would be disallowed.

From the same rules, under the Moving section it states:

**If a piece is the only connection between two part so the Hive, it may not be moved. (See 'One Hive rule' p9)

That rule on p9 stating:

The pieces in play must be linked at all times. At no time can you leave a piece stranded (not joined to the Hive) or separate the Hive in two.

In an example the One Hive rule has the text:

Moving the black Queen Bee to a position where it re-links the Hive is also an illegal move, as the Hive is left unlinked while the piece is in transit.

I see no difference between your second diagram and the example move: you're taking a piece that is the only link, and moving it to an adjacent position. While moving it appears that the moving piece is not considered to be connected to the Hive. Therefore your red move would be disallowed.

The beetle can use the yellow route. The rules expressly exempt the beetle from the "freedom to move" rule.

In re the 2nd question, that move would not temporarily break the hive, but it would not be legal. The rule on page 3 is that "[i]f a piece is the only connection between two parts of the Hive, it may not be moved."

Not the answer you're looking for? Browse other questions tagged hive .

10
In Hive, can Beetle hop over to another lane?
3
In Hive, can a beetle go up/down into an empty space?
1
Can the beetle start on top of the hive?
10
Clarification of Pillbug movement rule in Hive
9
Hive's freedom of movement rule - can you 'pass over' a gap that you can't go into?
2
Beetle crawling up more than one level