Spoilers for Commander 2018 have begun, and one card in particular has caught my attention: 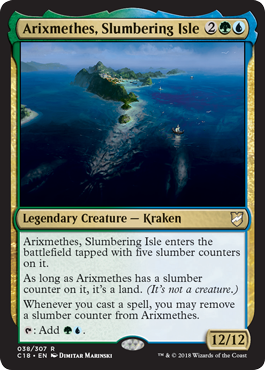 This card is like no other I know. What may be truly interesting is how it interacts with the enchantment Blood Moon: 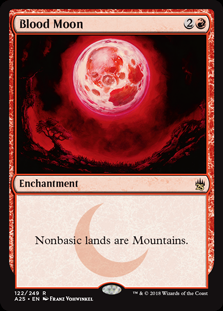 Here's a blog post about this by a level 3 judge. I don't agree. How I see this interaction is as follows:

All of these happen too quickly for any player to do anything. The way I see it, Arixmethes and Blood Moon on the battlefield simultaneously will immediately end the game in a draw (unless, of course, Arixmethes has no counters).

Is there an error in my thinking?

The blog post is correct. What you're missing is the system that governs the order in which those effects are applied, commonly known as the "layer system", and officially known as Interaction of continuous effects

In this particular case, both of the effects modify the type of the object, so they both apply in the same layer. Then we have to consider timestamps and dependencies to determine the order in which to apply them. The relevant dependency rules say this:

So, we apply Arixmethes' effect first, then Blood Moon's effect, and we end up with the result described in the linked blog post: Arixmethes is a Legendary Land - Mountain that can tap to add {R} with no other abilities.

7
Can nonbasic dual lands such as “Azorius Chancery” be destroyed by the card text “destroy target land”?
3
How does the Hickory Woodlot card work?
5
Combo question: urborg tomb of yawgmoth, torpor orb, kormus bell, dark depths = free Marit Lage?
6
Why did Experiment One not get a counter when my Undying creature returned to play?
6
What happens when Mathas, Fiend Seeker's bounty counters go away and come back again?
18
How does “it's still a land” affect a permanent that would not otherwise be lands?
7
What happens when you Magical Hack a Quicksilver Fountain?
7
Planeswalker Ability and Death Timing
4
Does setting a new type clear the rules text for non-lands?