Should the Awakening Center be rezed to host cards?

Do I need to rez the Awakening Center to install cards on it, or it can host them even being face down? 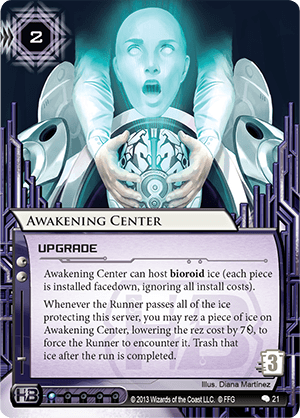 Yes, by default cards need to be active (in the case of an Upgrade like Awakening Center, this means rezzed) in order for their card text to be used.

From the Rules Reference:

A state in which a card’s abilities are able to be used and affect the game. This generally only applies to cards installed and faceup in the play area, but also includes the identities of both players and agendas in the Corp’s score area.

Unless otherwise stated, Runner cards are played and installed active into the play area.

A state in which a card’s abilities are unable to be used or affect the game. Even though they do not affect the game, inactive cards retain their printed characteristics (name, card type, faction, cost, subtypes, influence, etc).

Runner cards are generally inactive in the heap, grip, and stack until installed into the play area. Agendas in the Runner’s score area are inactive.

In addition to being inactive in R&D, HQ, and Archives, Corp cards are generally installed unrezzed, and thus inactive.

If an ability explicitly mentions an effect from a regularly inactive state, or if it can only work while the card is inactive, then that ability can still trigger and affect the game. This includes:

• “When accessed...” abilities on cards, which still trigger even while the card is inactive.

• Abilities that state they trigger from an inactive zone can still be triggered and used even though the card is normally inactive in that zone.

• Effects that modify how or when a card can be played or installed affect that card and the game even while the card would normally be inactive.

Yes, card text is only active on rezzed cards. Awakening center must be rezzed to host ice.

7
Can a Djinn host a Parasite?
4
Can we look at R&D cards that are trashed by virus install?
8
Can you remove a 'Personal Workshop' 'Power Counter' during an encounter with ICE?
11
Should runners be able to tell the difference between installed upgrades and agendas/assets?
5
Can I spend Stimhack credits after accessing cards?
4
Does Breaker Bay Grid reduce the cost of ICE hosted on Awakening Center
4
Trashing two birds with one stone
4
Is a runner card turned facedown still itself?
3
Quantum Predictive Model Questions
2
Can Apex Install Non-Virtual Resources via Assimilator?