Can you place a meeple on a tile you didn't place?

So when you place a meeple, does it have to be on the tile you played this turn?

Bonus: If you house rule it the other way, what effect would it have on the game?

You can only place it on the tile you just placed. From the Rio Grande edition rules:

After the player places a land tile, he may deploy one of his followers, using the following rules:

While the Z-Man edition rules don't have a specifically spelled out restriction; you can go based off of what they do allow you to do:

The sections on Highwaymen and Knights say something similar. While the rules don't say "you cannot place a meeple on a different tile", they don't need to, because the rules are there to tell you what things are are allowed to do. You are automatically not allowed to do anything that the rulebook does not give you permission to do.

As an extreme example, the rules don't say that you aren't allowed to take one of your opponent's meeples off the board, but it is assumed that it is not allowed because they don't say you are allowed.

That being said, the Z-Man rulebook just doesn't seem as clear over all. It awkwardly states the rule for placing a tile multiple times; for each of the types of terrain, and then gives the rule about placing a meeple for each one. Under the rule for placing a meeple a a monk, it actually says "You can place a meeple on a monastery as a monk." which fails to mention that it must be on a monastery that you just placed. You need to use the context of how placing meeples in general works to realize that you can't just place a meeple on any monastery.

You can only place a meeple on a tile you just placed. The Princess & Dragon expansion provides an exception to that rule.

As Gendolkari already quoted, the rules in the vanilla game are clear:

The player may only play 1 follower on a turn.

The player must take it from his supply.

The player may only deploy it to the tile he just placed.

However, in the "Princess & the Dragon" expansion, there are 6 magic portal tiles: 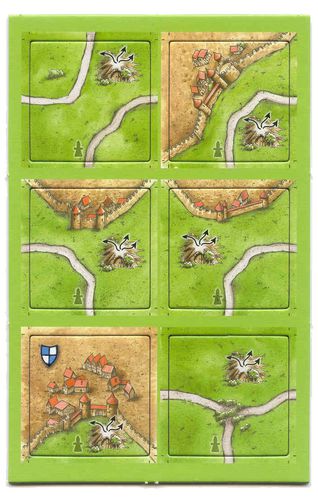 Note that a farm is not scored before the end of the game, so even when a farm is completely enclosed and can no longer expand, as long as it's unoccupied, you can place your meeple into it.

From the Princess and Dragon rules:

When a player draws and places a magic portal tile, he may place a follower on this or any previously placed tile. When doing so, he must follow all other placement rules, for example, not on a feature with another follower. In addition, he may not place his follower on an already completed feature.

9
Do you place the fairy before or after scoring a completed road/city/cloister?
27
What Are The Official Rules for Carcassonne: The River?
5
Can a Cloister be scored if one tile is an all-city tile in Carcassonne?
9
How many points does a thief score when placed on a tile with a crossing completing multiple roads?
4
Can I place a bridge that has no hope of completion?
3
Wagon movement on completion of a feature
1
Crop Circles expansion - Do players HAVE to place a meeple?
1
Difference between a knight and a meeple
3
Can I move the fairie on a bonus turn due to the builder?