Spades - how to bid my spades suit?

In the game of Spades, what is the best or popular practice to bid the ♠ suit? That is to say, how to estimate the number of tricks my spades suit can take?

I calculate my takes in the spades suit by considering those three factors:

Note: do not count the same card twice. Each card should be count once where it produce the maximal value.

Your method of adding [Spade-Length] - 3.5 seems reasonable, except I would halve that whenever partner has already made a bid of 4 or higher. Any bid in excess of 3 is very likely to include Spade length, and it is desirable to avoid double-counting that asset.

Even when partner's bid above 3 is solely based on high card strength, that reduces the value of extra Spades in your own hand as you will be attempting to not ruff those assets.

Also, I believe a refinement of the Spades' tricks estimate should consider the presence or absence of a void/singleton in one's hand. Balanced holdings around the table reduce the likelihood of ruffing tricks, while unbalanced holdings increase their likelihood. I'm not yet sure how I would do that.

Here is a table of all the hand pattern probabilities, with the top few (covering nearly 85% of possibilities) excerpted below. 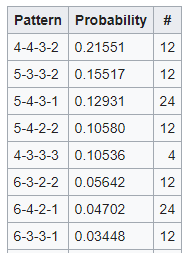 Note that the 4333 pattern is only the fifth most common hand pattern, and the most common is 4432 at over 21%. If we take the 4432 pattern as standard, then we can rank the most common patterns as being either stronger or weaker than the standard (in ascending order of estimated strength:

In this context stronger should be interpreted as more capable of implementing the desired strategy. A 6421 hand with short Spades and all its high cards, even if Aces, in the two long suits might be very capable of successfully bidding Nil. Obviously the placement of a hand's high cards is of import as well, as an additional refinement.

Also, these estimates are a priori - before trumps have been established. Clearly a long trump holding (Spades playing Spades) is even more valuable than shown here for winning tricks - but is less able to lose tricks.

My first attempt at a comprehensive hand evaluation for Spades would be the sum of:

That could be further refined, with experience, by adjusting the denominators for the second and third components for HPS and Spades length. When contemplating a Nil bid, consider subtracting the HPS term instead of adding it to the sum.

Not the answer you're looking for? Browse other questions tagged bidding spades or ask your own question.

5
Is it right to refrain from making a takeout double in borderline situations?
3
What card should I play when my partner has bid nil and I can't follow suit but do have Spades?
3
How should I teach someone new to spades how to bid?
4
When to lead a spade?
1
What if every suit were trump, and partners hated each other?
0
Value of short side suits in Spades
7
Has Marty Bergen's hand evaluation system been validated experimentally?
1
in Spades, when to bid such that the sum of bids equal 14?
2
Did I overstate my values on the following bidding?