Do the prices of cards drop when they leave Standard?

I'm looking to build a Commander deck with a number of cards from Kaladesh through Hour of Devastation, which are still Standard legal as of this writing but will drop out soon. I would expect that players who focus on formats like Standard and Brawl might decide to get rid of those cards when the new sets come out, leading to a price drop. I'm curious if this can be seen looking at historical price data.

I've tried to research this on various sites that show price histories, but I don't know enough about Magic's recent history to separate the signal from the noise. That's why I'm looking for your expert opinions here. A good answer would consider a representative sample of cards that were popular during their Standard season and show how their prices behaved after, especially if those cards continued to be popular in Commander. If there is often a price drop, knowing about when it happened (release day, a week prior, a month later?) would also be helpful.

I do not want any speculation about future prices. "Here's the historical data but Guilds of Ravnica will be different because xyz" is not an answer. I'm only interested in past results. Also I'm interested in prices for paper, not online.

TLDR: Great cards do not significantly drop in price when they rotate out of standard, as great cards are usually playable and viable in other formats.

When a card is great, and used across many formats, there is no reason for someone to reduce the card's price when they sell it. This includes when it rotates out.

Though, there are some things that DO cause card prices to drop. If you are looking to buy a card at a drop, try and look for one of the Three Rs.

Remember however, that predicting when these can happen is very hard to do. It is very similar to the stock market, for predicting both upwards and downwards price spikes.

Reprints, removals, and realizations. This is because a great card in standard can be used across multiple formats, and thus has a cross format value. So unless something impacts it greatly (like one of the Three Rs) it will not drop in price. That being said, if a card is only seeing play in Standard and Standard alone, then the Three Rs are pointless, and the card will probably drop when it leaves (but if that is the case, the card is probably not a great card). This drop however is not sudden, and is usually over the course of the end of the lifespan of the sets.

Reprints: When a card is reprinted, no matter how good it is, it will go down in value. This is because there are now more of the card. Even if it is still a valuable card, there are more of it, and thus it is less valuable.

On the other hand, a card that has been confirmed that it will never be printed again will go up in price, such cards like Black Lotus or Bayou. This applies to very old cards most of the time, but some rare versions of cards have their cost raise in a similar way (such as Kaladesh Masterpieces or Zendikar Expeditions). This may change if the lottery cards get reprinted eventually.

Example: Seedborn Muse is a card that has been worth a lot in recent time. When it was released, it was not worth much, but as time passed, it went from a card worth ~2.5 USD up to a card worth ~30 USD. But, it was reprinted as of recent in the set Battlebond. Since then, it's price has dropped excessively, going down towards ~13 USD (Specifically the Tenth Edition one, the Battlebond one is worth even less).

Removals: When a card gets removed from a format (through a banning), it instantly loses a lot of value it has. While this could be looked at similarly to a card rotating out, the shock of an important card getting banned has people rushing to sell it. This causes the price to drop as a lot of them are pushed into the market at once.

Example: Emrakul, the Promised End was an extraordinarily powerful card in standard. But, come January 2017, it was hit with the ban hammer, and was removed from standard. It dropped by around 50%, going from ~20 USD to ~10 USD, and stayed rather low for a while. (Recently, it has began to climb back up however, but this is assumed to be because another format has began to use this version of Emrakul).

Another example: Smuggler's Copter was a card that was seeing an absurdly high amount of play in Standard. Along with Emrakul, the Promised End, it got banned in January of 2017 from Standard. Before the ban, it's price had been steadily declining from ~20 USD to around ~10 USD, but when the ban hit, it began to rapidly drop in price. Within a week, it dropped down to ~6 USD. From here, it slowly declined to ~2 USD, where it has stabilized and been for a long time.

The main reason for this type of downwards price spike is people rushing to sell their copies before the price reaches it's lower stabilized price. 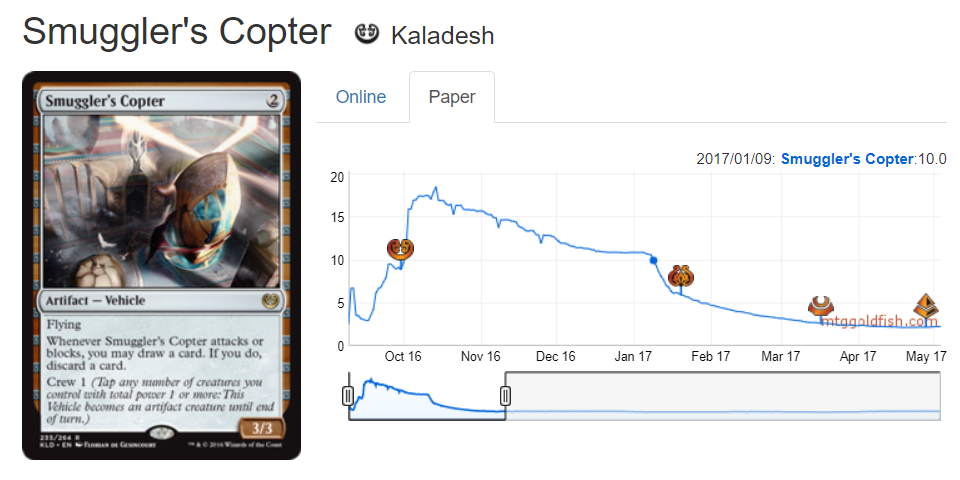 Realizations: Very often, during spoiler season or when new cards are released, cards will get over hyped and over priced. Eventually, they will go down once people realize they are not as good as they thought.

This can work in the other way as well, where a card that was under the radar gets realized for hidden potential. Examples being cards that fit in a combo or cards that counter a popular deck type nicely.

Example: Karn, Scion of Urza, was very expensive shortly after his release (reaching around ~60 USD at his peak). But, once players began to realize he was not as good as people made him out to be, his price slowly fell back down to his original price (~40 USD), and eventually even lower (~30 USD).

As you can see, those are some major ways prices drop. If a card is good outside of Standard (such as EDH), do not expect it's price to drop until it receives a reprint, a banning (from a format it sees play in), or it is replace/realized to be not as good as it is.

An example of a good card not dropping after it rotated out is Thought-Knot Seer. Once the hype for it died down, it stabilized at ~6 USD, and is even climbing today. This climb has been happening even after it was rotated out of Standard (as it became a staple in a Modern deck).

Conclusion: If a card in standard is truly great, it will not lower significantly in price when it rotates out of a format. This is because a truly great card will see play across multiple formats, and thus keeps some level of value across them. It takes something much more ground shaking to have a card spike downwards in price, such as a reprint, a removal, or a realization.

A note: the opposite is true for upwards price spikes, as it seems those happen a lot more often in comparison. People are faster to sell high than to sell low, as it is logical when running a card selling business/selling cards for profit.

Browsing through the price histories of the highest valued cards from Eldritch Moon on mtggoldfish, I have not been able to find any sharp drops in price corresponding with the set rotation. Logically, this makes sense. The amount of Standard play you can get out of Splendid Reclamation purchased a week before the release of Ixalan is not substantially different than what you would get by purchasing it a week afterwards. Play value is a value over time proposition, and the amount of time available to use a card in any format drops linearly even though the exit is abrupt. (The only card I could find to show a precipitous drop was Emrakul, the Promised End which was banned part-way through the season.

Also, while price drops tended to be gradual, price hikes tended to be precipitous. Every set released contains new cards with the possibility of making older cards unexpectedly powerful in Modern. Bedlam Reveler abruptly spiked after the release of Rivals of Ixalan, and while some of that spike dropped away, the price it stabilized out was five times higher than where it had been before. (The price spike wasn't immediate, but I'm sure that there are some examples that are).

High value cards hardly drop, some even increase in value over time, since they found a slot in modern or are a must play in commander (yes, even that's become an issue nowadays).

Take a look at Collected Company: It is a strong card, costing about 9 to 10 Euro when Clans of Tarkir was still standard-legal. Nowadays it is about 14 Euro when purchased in a reasonable quality.

A similar fate should befall some of the more valueable cards from Kaladesh and Amonkhet, e.g. Heroic Intervention. Actually I am surprised Chandra, Torch of Defiance is that cheap currently - she peaked about 25 Euro. So, depending on which cards you seek to acquire, and also at which price you draw the line, you might consider buying now.

In the end Magic cards are a lot like stocks - hard to predict, and a bit risky.

Most card prices start dropping a little before the standard rotation, continue dropping up until the December or January that follows the rotation, and then start rising (very slowly). This pattern is least likely to hold true if the card is equally or more sought in non-standard formats than it is in standard, e.g. Monastery Mentor, Snapcaster Mage, Past In Flames, Griselbrand.

Not the answer you're looking for? Browse other questions tagged magic-the-gathering pricing .

7
What, generally, happens to card prices when a new set is released?

10
Can I change the order of cards when they change zones?
7
Is there a naming convention for the various standard-formats as they existed throughout history?
6
What are my cards good for once they have rotated out of Standard?
7
What, generally, happens to card prices when a new set is released?
4
What are the most expensive cards in Magic: The Gathering?
2
Can't find the specific price for MTG japanese cards
1
Where can I find in-depth analysis of different digital card games?