Who won this match of Go? 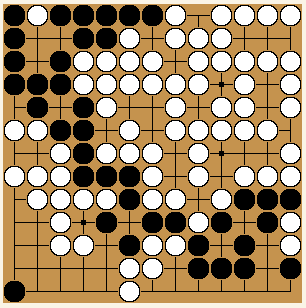 Me and my girlfriend tried playing our first game of Go last night, but we're not sure we understood the rules so we can't determine who won this.

Can you understand or maybe mark this so that we understand whether we played correctly or not, and also which one of us won? We played until we ran out of stones.

The rules of go do vary a little, but it very rarely makes any difference to who wins, and certainly not in this case.

You can enter diagrams on this site (though a photo is sometimes easier); I have made one of your position.

You pass at the end of the game when you do not think you can increase your score (explained below), and stop when both of you pass one after the other. Your set should include enough stones for you to be able to get this far, but you may occasionally have to swap prisoners. The winner is then the player with the higher score.

Since you did not finish the game, I have added the marked stones. To keep things simple1 I assume White plays first at F45, which forces Black to capture at B12!2 After that I assume moderately good play from both players:

and then (I fear this site only supports 10 moves/diagram):

These result in this final position:

There are two (nearly) equivalent ways to score the game:

I counted 39 black stones and 72 white stones in your original picture, a difference of 33. For simplicity I assume White has captured 33 stones and Black none.

To avoid subtraction and make counting easier, people usually put their captives into their opponent’s territory and rearrange the stones to make the territory into rectangles. Neither of these changes the score (difference), if done right. In your game, however, this would have completely filled Black’s territory, another way of seeing that White had won heavily.

If Black plays first after your final position, we have, as noted in footnote 1, a somewhat more complicated sequence:

In this case I count:

In fact I now believe that White would have done 1 point better by making their threat at E3 instead of G12, but I am afraid I do not have the time to redo the diagrams. In any case, Black is 10 or 11 points better off than when it was White’s turn first.

1 If Black plays first, they can capture at ⬤ J5, creating a ko, which makes the game a lot more complicated. White is not allowed to recapture at ◯ J4 because that would recreate the situation after their previous move, so they first have to make a threat, such as ◯ G12, after which ◯ C12 would capture 7 black stones.

2 This is probably not clear to you, but if White gets to play at ◯ B12, Black will be unable to get to separate eyes, and will be captured in the long run.

3 Although ⬤ A1 has not been fully captured, White could do so. This would not make any difference to the areas White and Black control. If Black tried and failed to defend it, territory scoring would give the same answer, because they would give White (almost) as many extra captives as White made extra moves. If Black just passed, some versions of the rules would require Black to give White an extra prisoner every time, to make territory scoring give the same answer.

4 Surround in the sense that (it is unoccupied and) there is not way from that point to one of your opponent’s stones (except perhaps one that they agree is lost, such as ⬤ A1 – see also3).

The piles of stones in Go are meant to be effectively unlimited; the game is played not until you run out of stones but until there is nothing worth doing anymore. For your first game, I'd recommend playing until every vertex is either covered by a stone or completely surrounded by one color in such a way that the other player can't legally play there. Then score based on how much territory you control, which will be the vertices you cover plus the ones that you completely surround.

After one or two games of this though, you will see that at a certain point there is no reason to go quite that far. For example in your game, most of the upper right quadrant is so completely dominated by white that there is no point to playing it out: white could easily cover every vertex, and any stone black played would be captured very quickly. As you start to figure out which areas are fully controlled by each player, you can play less and less of the endgame, until you arrive at the true end condition and scoring system of Go, which is basically that the game ends when both players agree on who owns which territory. At that point you can look up the details.

This game is yet undecided and not completely played out. You problably have some prisoners: Just exchange prisoners (the same amount for each player) to continue the game.

The most striking point is the 2-2 point in the upper left corner: Black needs to play it to secure life, when White plays this point, the Black group is almost dead.

There is a special situation in the centre of the lower margin: White can capture two Black stones (and Black can take back one White stone) securely connecting the five stone group to the central white group. Black can start a Ko by taking the single White stone. White cannot take back immediately but has to play a Ko threat elsewhere on the board. Black has the decision to react to the Ko threat or to secure the Ko by filling it (or, in this game by capturing another stone of White).

Just counting the preliminary state of the game, White is leading by a thick margin (ca. 25–30 points). Blck can still hope to win the Ko and to attack the 5 White sones in the bottom margin.

15
Honinbo 1970, match 1: Why does white need to play toward the edge here?
9
How many points are won/lost during this exchange?
10
Why is this move considered bad?
2
Making sense of this app's territory resolution
12
What is “looking for a place to resign” in go?
3
How would this seki be scored at the end of the game?
2
How many stones for small go boards?
4
Who has these intersections?
0
Can this game still be won?