Whan Happens if I Copy Etrata, the Silencer? 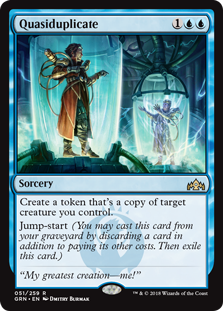 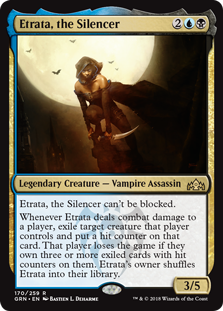 What happens if I try to copy Etrata, the Silencer with Quasiduplicate (via Qicken, Leyline of Anticipation, etc.) in response to her triggered ability? Since I create a copy of a Legendary creature, according to the rule, I have to sacrifice one. So my question is: what happens if I choose the one which is going to be reshuffled in the deck? Does the copy remain and the effect of the exiled monster etc. + the reshuffle take place?

The key here is that it is impossible to take any action while another spell or ability is resolving. So, if you are somehow casting Quasiduplicate to copy Etrata while Etrata is about to be reshuffled, you must be casting it in response to Etrata's triggered ability. If you do so, after the spell resolves, you will have both the original and the copy, so state-based actions will apply and the legend rule will require you to put one of the two into your graveyard. If you choose to put the original into your graveyard, you will still follow all of the instructions possible, and you will shuffle your library but not shuffle anything in because the original creature is no longer there to shuffle in, and the copy is a separate creature unaffected by the ability. If you instead put the copy into your graveyard, it will be as though nothing has changed, and you will resolve the ability as usual.

No, you don't get to shuffle Etrata into your library if you sacrifice her.

First of all, Quasiduplicate is a sorcery. That means you can't play it while Etrata's ability is on the stack. You can play sorceries only when you have priority, during your main phase, and when the stack is empty.

307.1. A player who has priority may cast a sorcery card from their hand during a main phase of their turn when the stack is empty.

Second, if you somehow manage to play Quasiduplicate at instant speed in response to Etrata's trigger, it would resolve first and, as you already noted, you would have to choose which Etrata to keep. If you keep the copy, the original that triggered its ability goes to the graveyard. When the triggered ability resolves, it tries to shuffle Etrata into your library, but the card in the graveyard is a new object - Etrata's ability "loses track" of its source when it changes zones. It will still exile the targeted creature with a hit counter on it, but Etrata will not be shuffled back.

609.3. If an effect attempts to do something impossible, it does only as much as possible.

Etrata, the Silencer has a triggered ability "Whenever Etrata deals combat damage to a player, exile target creature that player controls and put a hit counter on that card. That player loses the game if they own three or more exiled cards with hit counters on them. Etrata's owner shuffles Etrata into their library." That entire ability goes onto the stack as a block, and resolves together. You do not get priority between parts of it resolving, and you cannot cast anything "while" this is resolving. You either play it before it resolves, or after. If you somehow play Quasiduplicate while that is on the stack (which normally you wouldn't be able to do, as it is a sorcery), then the spell "Create a token that's a copy of a creature you control" goes on the stack. Once that resolves, you have two legendary creatures. If you choose to sacrifice the "real" one, then when you reach Etrata's ability, the Etrata that it applies to is no longer on the battlefield. Since the ability "looks for" Etrata on the battlefield, it will not be able to find it, and so will not shuffle it into your deck.

If you want to pursue this strategy, a better card would be Helm of the Host, which specifically says that the copy isn't legendary, so you would not have to sacrifice either creature.

If you chose to sacrifice the Etrata whose ability is on the stack, you will end up with Etrata in your graveyard and the copy on the battlefield. You will still get to exile a creature with a hit counter.

This is because the triggered ability still resolves, and does as much as it can successfully. See Hackworth's answer for why Etrata doesn't get shuffled back in from the graveyard.

Note: there were some issues with the question that have been edited. This is an a response to the simplified question.

Abilities that mention a card by name are tied to that specific copy of the card, not any card with that name, those few that are specify "cards named X" like Accumulated Knowledge, Detention Sphere or Demigod of Revenge. This means that the triggered ability of Etrata, the Silencer is tied to the specific copy of Etrata that had swung, you do not get to choose which copy of a creature will be subject to an effect that mentions that creature by name.

You also cannot cast anything while an effect is resolving, there are things in Magic that cannot be interrupted. Players need to have priority to cast spells, most magic players quickly pick up how priority moves and are able to follow that and cast spells, no player has priority while a spell is resolving, and the full spell must resolve before any player gets priority. You would also need to be able to cast Quasiduplicate, a sorcery, at instant speed, this can be done through effects like Quicken or Leyline of Anticipation.

Copying a legendary creature causes the legend rule to apply, this happens as a state based action, as soon as the copy is on the field, before any player gets priority, all but one copy of that creature you control must be sacrificed. The only way around this is through Mirror Gallery which removes the legend rule while it is in play, or copies like Sakashima the Impostor which keep their own name, so the rule doesn't apply.

If the goal is to avoid shuffling Etrata into the library, the best way to do this would be to bounce or flicker her while her ability is on the stack. You could have Brago, King Eternal, Mistmeadow Witch or Deadeye Navigator as instant speed and repeatable ways of flickering her, breaking the connection between Etrata the card and the ability on the stack. Removing the source of the ability once it's on the stack does not stop that ability from resolving, so you still get the exile, still move towards the three hit loss for your opponent.

8
Dimir Doppelganger becoming Lazav, Dimir Mastermind
4
multiple lines in spell abilities - why new paragraph sometimes
3
Arcbound Ravager and Shortcuts
7
Copying Etrata, the Silencer, but not its name
3
What happens when Progenitor Mimic copies a legendary creature?
6
What happens when I sacrifice a creature when my Teysa Karlov is on the battlefield?
3
What happens when I copy a creature whose characteristics change before the copy resolves?
24
Is refusing to concede in the face of an unstoppable Nexus combo punishable?
4
Etrata, the Silencer and token creatures
2
Does the rule for auras remaining in their zone apply when an aura token is created?