Can someone be "one trick" better at bridge against "club level" competition?

There is a player on the site who claims to be able to play bridge "one trick" better than some opponents. I don't doubt this if the opponents are say, advanced beginners.

But beyond a certain level of play, such odds become too steep even for a world class player. I'll use examples from other games where I'm sure of my premises to illustrate my question.

In chess, "queen odds" is a heavy handicap. So much so that while a beginner can be beaten by many people at those odds, even an intermediate player would be a favorite against a world champion given those odds. In golf, if an "intermediate" player has say, a +8 handicap (over 18 holes), even a world champion might be hard pressed to beat him by one stroke a hole, or a score of -10, on most days. Put another way, my definition of a solid "club" player is someone who would be a favorite with queen odds against a world class chess player or one stroke per hole odds against a world class golf player.

When I refer to "club level" competition in bridge, I mean people who play bridge regularly take lessons, and practice, and occasionally participate in tournaments against people of comparable ability, but do not play professionally.

In bridge, my understanding is that contracts are geared to a fight for the last trick. That is, when four of a major is bid, the declaring side usually has nine tricks in hand, the defending side three, and the fight is over the last trick. If partnership A is "one trick" better on average than partnership B, it would imply that the weaker partnership would lose essentially every contract that the stronger partnership A was (barely) capable of making.

Here's my alternate theory of levels: My feeling is that a club player is someone who can usually make contracts when the breaks are "normal;" e.g. there is an opposing distributions of one's trump or other key eight card suit of 3-2, (this occurs 68% of the time), or an equivalent high card distribution. An expert is someone who can often prevail against a 4-1 suit distribution, which occurs 28% of the time, or equivalent high card distribution. A world class player can beat even a 5-0 distribution the few times it comes up. So relative to the the club "68%-er," the expert player will prevail at least 20% more often (out of a possible 28%), and the world class player will win an additional 3%-5% more often. That's "less" than one trick.

So when someone claims to play bridge one trick better than others, could that possibly mean "club level" competition, or only at most against advanced beginners?

Absolutely. And the best in the world are that much better again, or more, than those players.

The year before his premature death I had the pleasure of kibitzing Mark Molson in a late KO round of the Toronto Easter Regional. I arrived at the break, and Molson's team was down a couple of IMPS. Receiving permission to kibitz, I parked myself behind him. Across the table was the client.

Not knowing me from a hole in the wall, Molson wouldn't even let me see his cards for the first hour. Gradually, as I demonstrated good behaviour, he loosened up and I was able to settle in to enjoy the game. After 15 boards no more than a couple of likely 1-IMP swings each way had occurred. On the final board Molson picked up a balanced 12 count and drove to a 3NT game opposite his partner's balanced 9. Two 4432 hands with a combined 21 HCP - but the opponents didn't know Mark was light, opening a deceptive opportunity that allowed him to steal a tempo. Mark also had all four 10's and three of the 9's amongst the combined holdings.

I saw a couple of opportunities for the seventh trick, but had no idea where to even begin for an eighth or ninth. After a couple of minutes (only) thought on the opening lead, Molson saw that if one finesse was on (for trick 8) he had a chance of combining two possibilities, either a squeeze on one hand or a throw-in to the other, for trick nine. The gods were smiling and he chalked up 9 tricks, a 10 IMP swing, and the match.

In the absence of a Deep Finesse analysis, or the pleasure of watching Mark play it, I'd have played this hand for +120 and likely have never even realized that I had missed a 30% Vulnerable game opportunity.

The best players in the world, the Bob Hamman's, Jeff Mechstroth's and Eric Rodwell's, are nearly as far above Mark Molson in ability as Mark was above me.

You have phrased the question with a hidden assumption that all tricks are equal. The scoring, especially in IMP play, makes that far from the case. A full game swing (made at one table, set at the other) scores the same as 7 or 9 overtricks depending on vulnerability. In a 64 board IMP match with well dealt cards a double slam swing for 20 or so IMPs is not impossible. Hands are won or lost in the bidding as often as in the play and defence, and a double part-score swing is the same 7 IMPs as a non-vulnerable full game swing.

What does "a trick better" really mean in the context of Contract Bridge?

This is right on the cusp of the 1 to 2 IMP transition of the IMP scale, so let's say that our one trick better standard is also about 1.5 IMPs.

Here is the complete Round Robin record of France in the 2017 Bermuda Bowl: 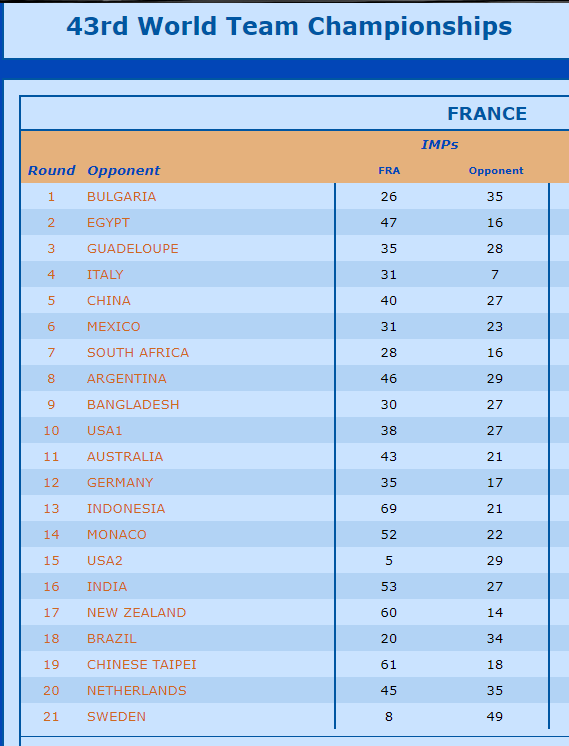 Over the 336 Boards (16 * 21 rds.) of the Round Robin France accumulated a total net IMP score of +283, or 0.84 IMPs / board; against national champions that have placed well in Zonal championships to earn the right to compete at this level. By our estimate above that represents about 0.6 trick better than opponents who, on average, might well be 2-3 tricks better than typical club players. And France finished second to USA2 in the 144-board final by a score of 278-276.

Not the answer you're looking for? Browse other questions tagged bridge .

4
In Bridge, Can I Ask About Previously Played Cards to the Current Trick?
9
How do you find not-quite-club level human opponents to regularly play bridge with?
8
Can one ask for a "time out" to study the hand in bridge?
2
Can one show that a majority of bridge hands could have been successfully defended?
4
In duplicate, is it ethical to base your play on other people's body language?
4
Is an emphasis on card reading/counting well placed for a learner?