Among good players, should one base one's play on the assumption that the opponents will play deceptively?

Here is another Frank Stewart example. I am showing only the N-S hands since this is a declarer problem.

N-S vulnerable, the bidding could have been 1NT-3NT; E/W pass throughout (but the actual N-S bid 1c and 1d before going into NT).

The opening lead was the Jack of spades. Declarer had five tricks in the majors, and needed four more from the minors.

My choice of play is to win in the dummy, lead the jack of clubs and let it ride, then finesse to the AQ of clubs. This wins the four needed tricks when clubs are split 3-2, and also when the clubs are 4-1 with the king in East.

Declarer chose to win in hand, and finesse for three diamond tricks, in addition to the ace of clubs. This play works best when West has the diamond queen (it doesn't matter who has the ace). It also has "additional equity" when East has the queen and plays it on the first trick. Then South will revert to the club finesse (which wins as the cards lie).

But in the problem, one of two Easts played the ace of diamonds on the first finesse, concealing his Qx. South lost time by taking the "marked" finesse and lost the "race" for tricks.

East has a nearly complete picture of the hand as soon as his partner plays the D6 at Trick 2:

Hence East's win of the Ace at Trick 2 is a mandatory falsecard; all near-expert and better players will make the play, as it is the only way to set the contract. An expert East will still make this play, smooth as silk, with doubleton AQ of diamonds.

Let's answer these questions one at a time:

However, even World Champions occasionally miss a mandatory false card if pressured early enough in the hand, as this hand from the 1976 Bermuda Bowl Final demonstrates. After leading a Heart to South's low ruff. West failed to rise with KC on the low Club lead by Declarer. 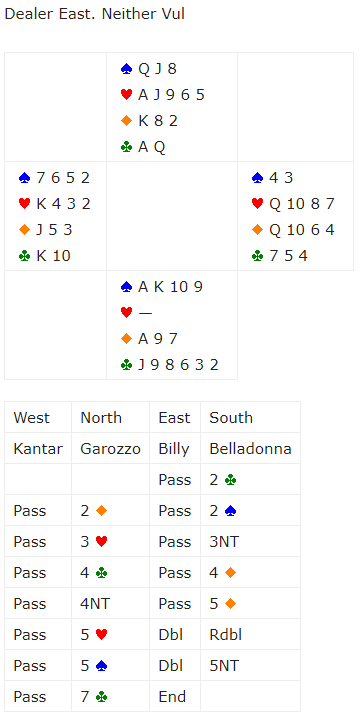