What is the expected duration of a game of War?

In the card game War you deal a standard 52 card deck between two players. The players than flip cards with the higher card winning. In the case of ties (wars), each player plays N additional cards an the player with the highest Nth card wins all the cards (subsequent ties follow the same rules). The game can last a very long time and seems to never last a short time.

What is the expected number of "turns" until the game is completed?

I learned to play war with N equal to 3 (i.e., a total of 10 cards are played in a war: the original tie, 3 face down, and a final comparison card).

For completeness assume the game is over if a player has less than 5 cards and gets into a war (i.e., does not have a final card to flip).

Assume that upon playing your last card from your hand, you shuffle the winning cards into a random order and resume.

Assume the cards are in random order to start.

War is actually not a game but an Automata, as players don't have any options.

He used N=2 while you play with N=3, higher N shortens the game, however I don't think that it will make a big difference. 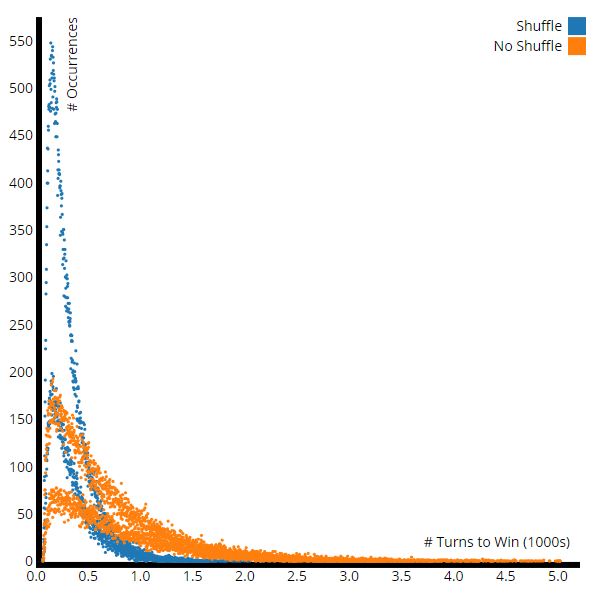 As a math problem, this is a case of a random walk ("walking" N cards at a step from your opponent's deck to your deck, where N is usually one, but can be 4 or 7 or whatever depending on ties.) It is often framed as the "gamblers ruin" problem. Ignoring the issue of ties and treating each throw of cards as an independent trial, the average number of turns is 26*26 = 676 turns.

Factoring in ties would reduce it quite a bit based on N -- allowing for bigger steps occasionally. The average number of turns when the step size is 5 (i.e., every turn is a war that is resolved on its first tiebreak) is equivalent to playing with 6 cards each (26/5, rounded up). And 6*6 = 36 turns.

EDIT: I should also emphasize that this approach assumes the trials are independent trials. That's basically the difference between dice and cards. Each throw of a die is independent. But each draw is not -- it depends on what else has been drawn / what else remains. And in the case of War, winning a trial in general improves your odds on the Kth following draw (when you draw that card again). It's a very mild (IMO) runaway leader effect (mitigated by also receiving the losing card, but I still think the net is a gain). And it will multiply the advantage, if any, bestowed to one player over the other in the initial deal. That is, any slight deviation toward the higher-numbered cards in the initial deal will be amplified each successive trip through the deck.

Well, from that same link you shared, on the summary table on the right reads:

Which directly says the average duration of a game.

Now, turns on this game, as per my experience, are quite fast. They can last a few seconds (reveal cards, someone wins, cards are taken, end of turn), or in case of a tie some extra few seconds.

Not the answer you're looking for? Browse other questions tagged play-time war or ask your own question.

14
What are the standard time settings in chess
7
Which Axis and Allies Game Takes the Least Amount of Time to Play?
29
How can we play a shorter but satisfying game of Arkham Horror?
6
In the card game “War”, what happens when a player plays their final card in a War?
6
Thunderstone game taking too long (2 players)
3
What variants are there for the playing-card-based game “War”?
2
How to limit time of game in GoT?
9
What happens if I lose a match due to time in a single-elimination game, but I have a Platinum Angel on the battlefield?