Go - How does one count territory in these scenarios?

I'm learning to play Go (Japanese rule) however I'm still confuse how to count territory in some cases. Which side each territory belongs to?

For each intersection, ask yourself if it belongs to white or black.

The issue with your examples is that the games are not finished yet. You should keep playing until you can answer the question above. For now let me just try and address the top right corner.

In scenario 1, white is currently enclosing two intersections. But black will eventually capture the white stones, and all the points will go to black.

In scenario 2, white is enclosing 4 intersections (marked x below), and black cannot capture the white stones because they have two eyes. Eventually that will count as 4 points for white.

The intersections marked o will probably end as "dame" (neutral points), as neither white nor black can enclose them.

Since I found many beginners struggling with understanding why the 2 eyes are needed, I'd like to point out why a group with 2 eyes is alive.

The "a group needs 2 eyes in order to live" is actually not a rule, it is only a consequence to another rule you've learned. Remember the rule that are not allowed to do suicide moves. Why is that? A stone with no other stone around has 4 liberties. 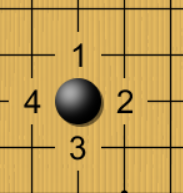 If the last liberty is gone, a stone or a group of stones are captured and will be removed from the board (directly). 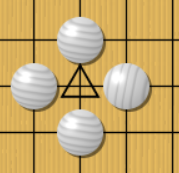 Now black can't play at the marked position because it would be considered suicide. The black stone wouldn't have any liberties and no group / stone with no liberties can exist on the board. So it would have to be removed right the moment it was played.

But now consider this shape of connected stones: 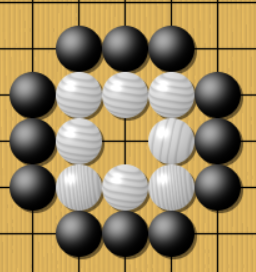 In this situation, the group can be captured. 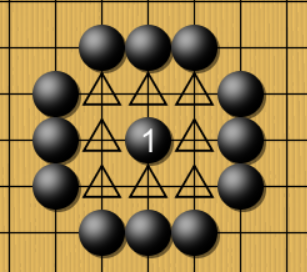 This is because the stones have only 1 last liberty left (this is called 'atari', by the way). The moment black plays the stone, the other group is captured and the played stone directly gains liberties; that's why it is not a suicide move.

Note: The group that was just captured had only 1 eye. 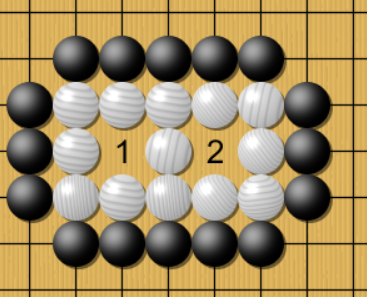 Note: This group has 2 eyes.

Given that rules, I think you should be able to tell now, which group is alive and which isn't. The game ends when both players pass or one side gives up. Dead stones become points for the group that captured it.

The more you advance in Go the more you'll be able to judge whether a group is alive or not and if it makes sense to play a stone in an already defined territory or not.

In your scenario 1, both white groups only have 1 eye. If white passes and black passes, the game will end. All white stones will be removed, (without Komi) white has 0 points, black has 71 (all blank points + all dead stones).

In your scenario 2, one white group has 2 eyes and cannot be killed by black, the other one has one eye. If both player pass, the game will end. The dead white stones in the lower left corner will be removed. (Without Komi) white has 4 points, black has 50 points.

But as already mentioned, normally the game wouldn't be considered finished yet.

3
How to count non fully walled territory?
2
Go - How does one count territory in these two scenarios? (9x9)
1
First things to learn about semeai?
4
Counting a surrounded non-alive carpenter's square
2
Has black’s moyo already given them an advantage
5
Go: How to count territory in this example?
5
Why choose tsuke-nobi after a double keima against hoshi?
1
In Go (board game) under Chinese rulings how does the scoring of empty territory work?
6
Mysterious move