Why people have to play every card and do the longest combo before closing? [closed]

So usually when I get to low HP and have no cards to fight, I pass the turn so that the opponent can finish me off. But 99% of the times they have to play every card they can and just waste time with animation. So why?

I just want to end and go on the next game. Why can't they have the satisfaction of delivering the final blow and finish it. At that point I just waste their time in return by waiting up my timer, especially if they pass without killing me.

There are multiple reasons that a player may be doing this.

The best solution to this is simply to resign when you know you've lost. Instead of passing your turn, forfeit the match. This saves them time as well.

The worst "solution" is to try and retaliate by wasting their time. That makes you the "bad guy" in this situation; it would be completely reasonable of them to complain about someone they played with that purposefully slow-played them to waste their time when they knew the game was over. Acting this way will simply make for a bad experience for everyone.

There're three kinds of Magic players: Spike, Johnny, and Timmy. Spike wants to win and doesn't care about anything else. Johnny wants to win, but wants to do it in a cool, flashy, combo-ish way that nobody else ever imagined was possible (e.g. by drawing their entire library and killing the opponent with the otherwise-unplayable Lightning Storm). Finally Timmy wants to win big, casting big creatures and attacking for huge amounts.

Take a look at this screenshot 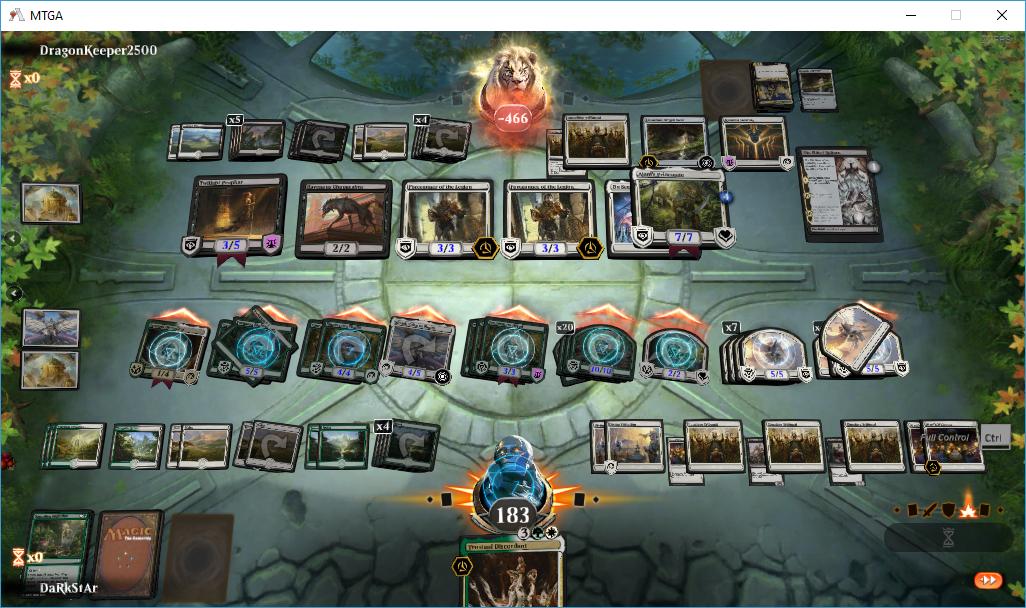 Zomg I hit my opponent to -466 life!!! You can tell that this player is a Timmy, and kudos to his opponent for allowing him to make this attack. Similarly, the opponent you describe in the question is probably a Timmy (or Johnny if he's doing a long combo) and he finds it fun to be able to execute the play.

All that said, if you don't like being on the receiving end of this kind of play, just concede. The opponent cannot stop you.

Not the answer you're looking for? Browse other questions tagged magic-the-gathering mtg-arena .

17
Why does Mana-Burn exist in Magic: The Gathering?
26
Why would you want to play with a deck that had 3 or more colors in it in Magic? (limited and constructed)
12
How many missed triggers are necessary before you begin to have Game Losses and/or DQs?
3
Arcbound Ravager and Shortcuts
2
Can I survive every enchantment, creature, and artifact in the game entering the battlefield at the same time?
3
Is there a good place to find information about strategies, tricks and caveats for specific cards?
3
How competitive are MTG Arena qualifier events?
11
How should a creature-centric deck prepare for board wipes?