So I was thinking of ways to get rid of Commanders other than destroying and exiling them. I found that some cards just plain out remove creatures and other permanents from game entirely. I was wondering if its possible to remove them that way because it's not like it went to the graveyard or exile.

As @Dopplegreener mentions, all cards that said "remove ... from the game" has been errataed to say "exile ...".

The problem with getting rid of a commander permanently is rule 903.9:

903.9. If a commander would be exiled from anywhere or put into its owner's hand, graveyard, or library from anywhere, its owner may put it into the command zone instead. This replacement effect may apply more than once to the same event. This is an exception to rule 614.5.

Ways to Nullify a Commander

At the end of the day though, short of eliminating the player, you can't permanently prevent someone from accessing their commander1. Any permanents you use to lock down their commander can be destroyed. Any other tricks you pull can be negated through some combination of Pull from Eternity, Elixir of Immortality, Mastermind's Acquisition, and Brand. There is always a way to get a card back, no matter where it has gone, unless it's owner has been eliminated from the game.

1. @ThomSmith found a way to permanently prevent a player from accessing a commander but it requires you to concede the game.

There are a handful of cards not legal in the format2 that can either permanently remove a commander or that deserve honorable mentions:

It sounds like you're describing cards that say "Remove (thing) from the game", like Unmake. Those are old cards from before the concept of Exile existed, and they now exile things instead. In the Magic 2010 rules change the Exile zone was introduced to the game, as was the action of exiling. With the same change, all cards that referenced "remove (thing) from the game" received errata to say "exile (thing)" instead. There are no current cards in the game that refer to removing anything from the game.

You can see that errata in cards that were reprinted later. On the left is the original pre-2010 printing of Unmake, on the right is the post-2010 printing with the instruction to "Exile target creature": 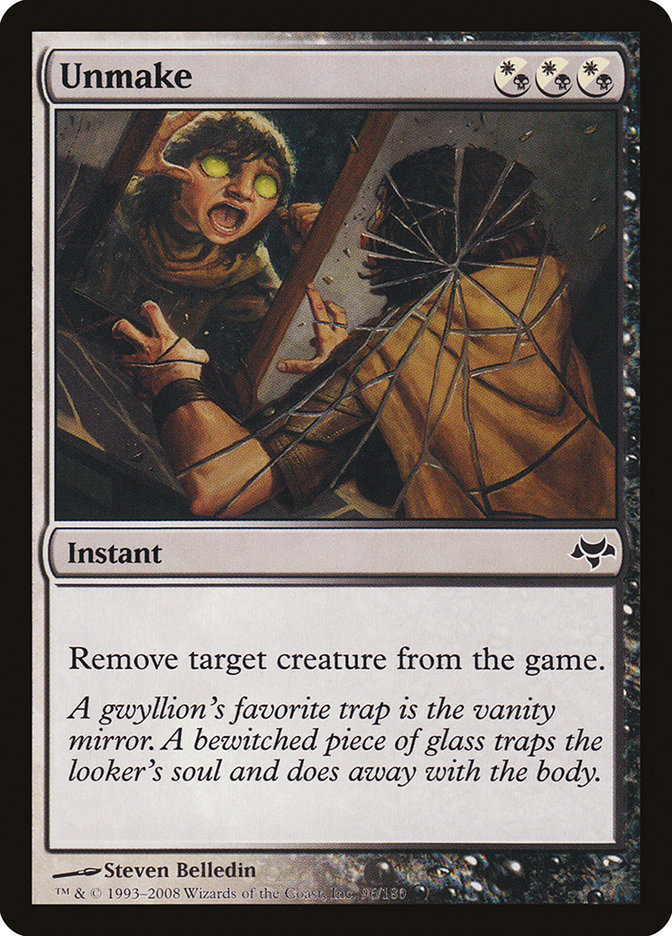 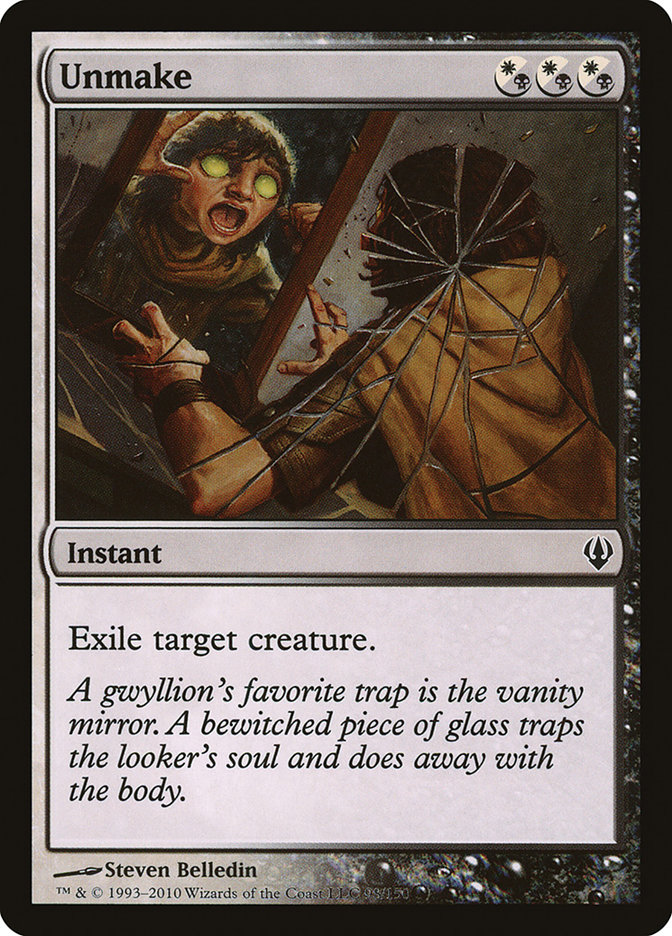 You can also see the current Oracle text of Unmake if you visit its Gatherer page, which is always the official source of what a card is truly considered to say, including all errata. You'll see that errata is reflected even on visiting its original Eventide printing: 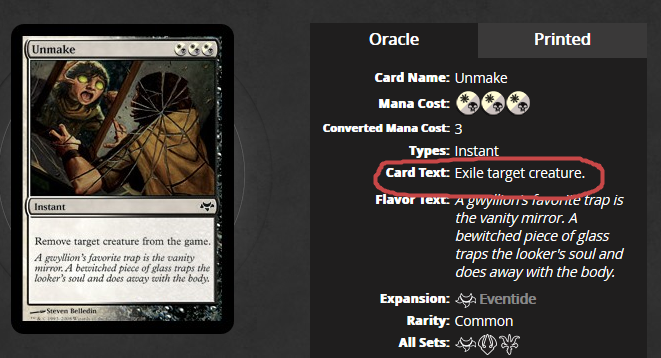 Commanders can't get "removed" permanently very easily at all: that's part of the point of the format. Typically if removing them to the Command zone isn't enough, you instead lock them down via auras such as Darksteel Mutation, Song of the Dryads, or One Thousand Lashes, or you steal control of them—but that only lasts until the player finds appropriate removal.

Can this sequence of events cause a commander to be permanently phased out?

Specifically, you can cause another player's commander to phase out and never phase back in as long as that player is in the game. This means that the commander is totally inaccessible; there is no sequence of actions that could put it back into play.

Suppose that you have a three-player Commander game. The players are Alice, Bob, and Carol. Bob's commander is Isamaru, Hound of Konda, a vanilla creature.

On Alice's turn, she:

If Alice had not Donated Isamaru to Bob, then rule 702.25m might have caused Isamaru to phase in during the next player's untap step. However, Bob controlled Isamaru as it phased out, so 702.25m does not apply.

Obviously, this is highly impractical — but it does work.

Before the C17 rules change, there was a slightly easier approach. Instead of equipping Isamaru to Grizzly Bears, Alice could attach it to a token. Under the older rules, tokens ceased to exist when phased out, so Alice would not have to concede. Under the current comprehensive rules, tokens do not cease to exist when they phase out, so this approach would not work. As far as I know, the only way to prevent a permanent that phased out directly from ever phasing in is for the permanent's owner to concede the game, which limits this approach to a multiplayer game.

9
R&D's Secret Lair + Ashnod's Coupon
7
Can this sequence of events cause a commander to be permanently phased out?

13
Would Pillar of Flames get rid of a Blightsteel Colossus?
3
Improve the Power of creatures in the graveyard?
21
What happens when a creature with “Whenever a creature dies” dies simultaneously with multiple other creatures?
3
How does Necromantic Selection work with Adarkar Valkyrie?
2
Can the Planeswalker type be removed from permanents?
9
I am really confused on how corpseweft works?
13
Why do effects that exile a card from the graveyard use the characteristics the card had in the graveyard?
2
Can I survive every enchantment, creature, and artifact in the game entering the battlefield at the same time?
7
Does Ashiok, Nightmare Muse's ult allow affected adventure cards to be cast as adventures?
10
Adventure cards and Feather, the Redeemed?