I am playing 7 wonders with leaders and some other extensions to extensions. One of them includes Stevie Wonder.
Stevie does this:

With his help, you can build a stage of your Wonder of the World; instead of paying the required number of resources, you pay the corresponding number of coins and slide Stevie under the appropriate stage face up.

But I have some questions about how Stevie interacts with other cards.

Note: Some of these scenarios have actually spawned during our games. Some Are just wild ideas based on the scenarios that actually happened.

Firstly it would help to put all these as separate questions. The first 2 specific examples are covered in the rules though under "interactions" 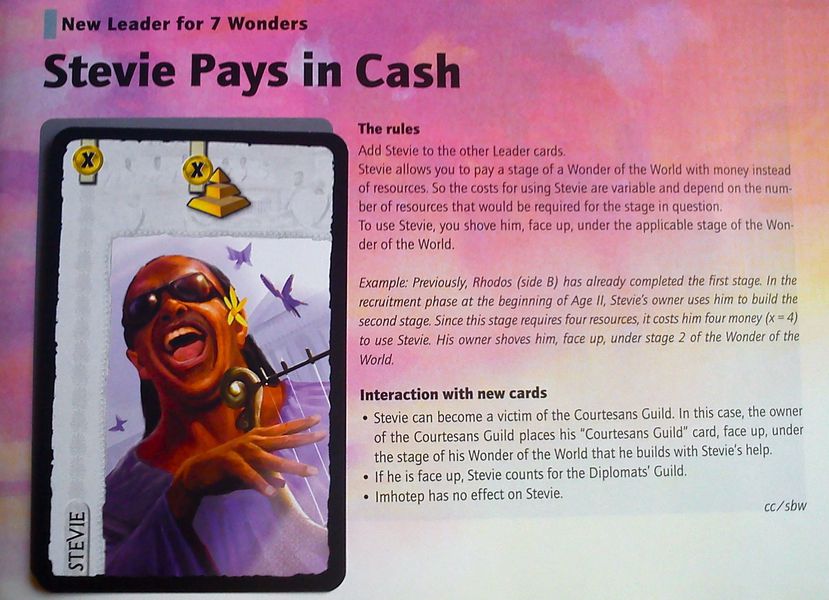 As for Abu Simbel. The rules say he is placed face up in wonder when its built. This would mean moving him afterwards to the side of the Abu Simbel where buried leaders are placed would be impossible as it would 'unbuild' the wonder.

As bonus info this question there is this question on BGG where the designer covers issues of points awarded for Abu Simbel where the cost of Leader varies per age. but as the 'cost' for Stevie can easily be calculated then that is the cost.

Not the answer you're looking for? Browse other questions tagged 7-wonders 7-wonders-leaders or ask your own question.

13
Timing Rules in Seven Wonders
11
Is it common to have too few resources for most cards in Age 3 of "7 Wonders"?
5
In 7 Wonders, when using a Leader to build Babylon (B)'s second stage before Age 3
1
If you have multiple wonders do you get multiple special powers?
1
Aspasia and Abu Simbel
2
Maecenas and Rome (B): are the extra Leaders also free?
2
Ramses and Babel tile 23: are Guilds free or do you have to pay coins?
4
Leaders expansions: Is trade commerce allowed during Recruitment phase
3
When can a guild be cloned based on Olympia's B stage 3?