Is cheating allowed in Munchkin?

I have been disputing with my friends lately about the fact that the creators of Munchkin intended for people to cheat or not. By cheating I mean doing anything the rules say you can't do or that is obviously not allowed, e.g.: using more hands then you're supposed to, stealing cards from the deck when nobody's looking. I believe the game is all about being a jerk and a backstabber in every way. Who agrees that you should be allowed to steal and cheat in Munchkin but have it be punishable however the GM sees fit?

According to the very old rules from the beginning of munchkin you could cheat if the other players didn't catch you.

Likewise, you may also use only one headgear, one suit of armor, one pair of footgear, and two “hand” items (or one “two hands” item), unless you have a card that lets you cheat or the other players don’t catch you.

That was in an earlier version of the rules and doesn't appear in the newer rules, so probably a no. On the Munchkin FAQ the fifth question under General Questions is

Q. But don't the rules say it's OK to cheat if you don't get caught?

A. Not anymore, and even when they did, it was a joke. If you want a game where cheating is in the spirit and the letter of the rules, try Illuminati.

Anyways, cheating is breaking the rules and makes the game not very fun, so I'd say no to cheating.

If you want to read those rules, I accessed them from https://boardgamegeek.com/filepage/3069/rulespdf. You need a boardgamegeek account to download them. To find that specific passage, hit Ctrl+F then write "cheat" in the box that appears. 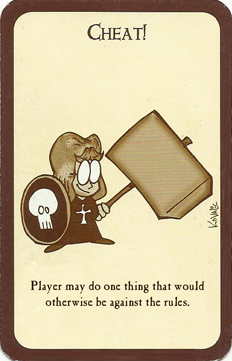 Not the answer you're looking for? Browse other questions tagged munchkin cheating .

46
How can I play games with closed information with players who cheat?
5
Cheating with foils and card orientation
6
How do I combine regular Munchkin with Munchkin Zombies?
6
Munchkin vs Munchkin Deluxe
9
Multiple Super Munchkin Cards
3
Spoons: is passing your cards w/o looking cheating?
6
Munchkin: carrying vs equipped
5
Are the Munchkin original and Munchkin Guest Artist Editions identical?
3
Dwarven Ale curse Munchkin
2
Does reading strategy guides before a game count as cheating?