Which discard pile for instant items played on another player's lane?

In XenoShyft Onslaught, in which discard pile goes an Instant Card when played in another player's lane? For example, if I use a "Hi-Ex Grenade" in the reaction phase of another player, do I discard that grenade in my or his/her discard pile?

For references, the rulebook only mentions what happens for troops and equipment played in another player's lane. Nothing about Instant Items:

The "Hi-Ex Grenade" has the "Instant Keyword": 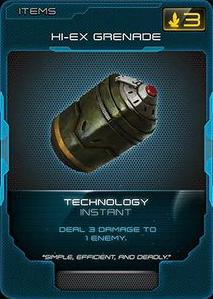 I found the answer in the official FAQ (not included in the box published by EDGE) published on CMON website (game creator) : https://cmon.com/product/xenoshyft/xenoshyft-onslaught

Q: If I play an Instant on another player’s lane (such as a Med Pack or Hi-Ex Grenade), does that card go to their discard pile?
A: No, it goes to its owner’s discard pile. The only time a card goes to another player is if it is deployed into their lane.

Keeping Instant Cards played on someone else's lane in one's own discard pile allows us to better "build" around Division Cards abilities (such as "Whenever you play a [Symbol] card, heal 1 troop up to 2").

Not the answer you're looking for? Browse other questions tagged xenoshyft-onslaught or ask your own question.

1
Can troops and equipment abilities be used on another player's lane?