How to make a small slam in bridge with less than 30 points between the partnership?

The following hand came up recently in the Common Game. I would like my gentle reader let me know how you would have bid in order to reach the optimal contract (6 clubs). I know that a small slam really is possible because a few partnerships, admittedly rare, actually bid and made 6 clubs. I suspect those partnerships used the Precision Club system, or some variation thereof; but any insights that you can provide would be much appreciated. 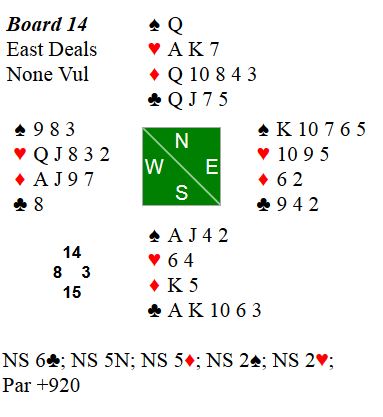 I propose the following sequence playing a standard approach, with EW passing throughout:

It is also faulty analysis to claim that NS have less than 30 points combined. The South hand is worth 16 to 17 points in a Club contract (15 HCP and either 1 point for the fifth Club or two points for the two doubletons) and the North hand is worth 16 Dummy points in a Club contract (14 HCP - 1 for the unsupported QS + 3 for the singleton Spade). This is a combined partnership strength of 32-33 points, and as the auctions above indicate that it is quite reasonable, using standard methods, to find the Club slam.

If finding reasonable slams were easy, they wouldn't be worth so much. Bridge is designed to reward those who can accurately reassess hand strength during the auction, in light of bidding by partner and the opponents.

It's possible that those partnerships used Splinter Bids, which are artificial bids that promise High Card Points a bit short of a guaranteed slam but also show shortness in the bid suit to compensate. With a bit of distribution luck it's possible to get extra tricks via ruffs.

As discussed in the article above, specifics like splinter bids after minor openings and other slam bidding conventions come into play. But I suspect that a splinter bid first alerted South of a favorable card distribution, with an Ace opposite a singleton spade.