Around 10 years ago, I've met a bunch of people who swore this game was THE best thing one could play. At the time I was mostly confused and didn't get all the awesomeness, and now, never found it back. The name still is a mystery so far...

The game played in ages - somehow like Seven Wonders except the actions were quite different between ages, in Age 1 for example you could wage war with neighbors and build infrastructure, in Age 2 you could explore by land and search technologies, Age 3 you could wage war with distant countries and form alliances etc... Each ages took around 1 hour to play, it was really a very very long game.

The game was set in Europe, or at least Western Europe around the 14th century or something. The main board contained at least the Italian states, pretty sure it had Vienna, Paris and Barcelona in it, it was quite a long time ago sadly I do not recall every locations on the main map.

The game used miniatures and cards, if you had some cards you could have a town, castle or something like that built in one location. The board was MESSY. Lot of information, lot of "provinces" and things to move around.

The battle system was a dice and card combo, every contestant rolled dices, you could use cards to help, but it costed money (or something like that).

The starting position were focused in Italy IIRC, kinda sure there was someone who picked Milan and someone else who played as Venice.

With enough technology you could invest, discover a random sub-map and play things in it. If Venice discovered Mexico for example, no other player could go there unless a certain age is discovered, it was very useful to hit the victory conditions.

Pretty sure to win one had to have a certain number of victory points AND a fixed amount of provinces, IIRC it depended on the starting position (Venice needed more victory points less provinces etc) but it might have been technology or external factors that reduced/increased it.

There was a lot of random events that could screw people, like revolts, plague etc, that happened more frequently to the one on top, don't remember if it was dice-based or cards based but it was advertised on the box of the game.

IIRC the box was red-ish and the name in yellow or something. The name was something like "Conquest" or related to war.

I think you talk about Conquest of the Empire (from 2005) 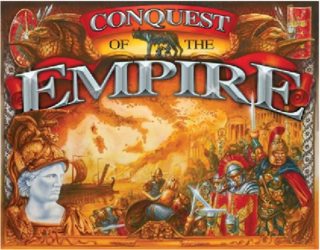 STRUGGLE OF EMPIRES is a better re-implementation of it.

I think that the description is a composite of several games. The largest portion is from Age of Renaissance, other fetures are from Conquest of the Empire, Age of Empires III, Condottierre.

The battle system from AoR does almost fit: the attacker rolls 3 dice, one attacker die, one defender die and one turn-order die (but you might house rule that the defender rolls the defender die instead), in the whole deck there are 4 1-time-playable cards that give you a small advantage during this round. It does not cost money to play cards, but it costs money to keep cards for the next round.

Some other features are from Conquest of the Empire as suggested in the other answer, namely the description of the box plus the minatures und building of infrastructure (roads, towns, castles). This game, however, has a battle system only with dice, no cards at all.

For some other elements I'm not sure where they come from.