I am designing an asymmetrical secret objective game (each player is trying to win with different objectives that other players don't know).

I want to introduce an element in the game which will let all the players participate in determining the outcome of specific events.

The players must be able to influence the outcome of an event without other players knowing in what way.

Additionally, Players would have different amounts of influence they could use towards events.

An event has two outcomes RED and BLUE.

So lets say there are 4 players, and they vote/bid as follows.

In this example, BLUE would be the outcome of the event.

If each player has cards that represent their influence (1, 2, and 3) and they have such cards in each of the possible outcome colors (RED and BLUE). so that each player then has 6 cards. When an event is being voted on, each player would choose one card to use.

After the vote/bid each player would need to reclaim the cards they spent so that they could use them again next time they need to vote/bid, and that would reveal who had used which card.

We could redistribute all the cards each time. So that no one would know who had used which card since they are all discarded each time

The Problems with this solution:

I want there to be a variable number of outcomes to events, such that some events could have 2, 3, or more outcomes.

I want the Player's influence to be generic, not specific to outcomes, so that the influence could be used for any event and outcome.

Players shouldn't be required to spend all their influence when voting/bidding and should be able to preserve it for layer votes/bids at a later stage in the game.

Players accumulate influence chips throughout the game and spend them when voting/bidding. When it is time to vote/bid on an event, each outcome is voted/bid separately using a bag which is passed around the table and each player can use as many chips as they want to vote/bid for that outcome by placing them in the bag.

voting would be slow. It would be hard to hide which outcome the player is or is not voting for and also how much influence they are using. It is prone to cheating with players peaking into the bag, or being able to feel if there are any chips in the bag already or even how many.

As you can see I can not think of a good solution for this. Games with similar mechanics:

[Players] need to collect skill cards ... Each turn also brings a Crisis Card, various tasks that players must overcome. Players need to play matching skill cards to fend off the problems; skill cards that don't match hinder the players success. Fate could be working against the crew, or there could be a [traitor]

... players are working together toward one common victory condition — but for each individual player to achieve victory, he must also complete his personal secret objective. This secret objective could relate to a psychological tick that's fairly harmless to most others in the colony, a dangerous obsession that could put the main objective at risk, a desire for sabotage of the main mission, or (worst of all) vengeance against the colony! Certain games could end with all players winning, some winning and some losing, or all players losing. Work toward the group's goal, but don't get walked all over by a loudmouth who's looking out only for his own interests!

I think your influence chips idea has the most promise. There are a few points that I'd bear in mind that will make this too long for a comment, and I'm not sure design questions like this have solid "answers" as such any way.

Use a card and marker combination

There are several different ways to implement this mechanic, one of the simplest (IMO) is to give each player a small cardboard card with several holes (each marked differently and representing a different vote) and a small plastic marker pin which can be placed in any single hole. Players secretly place their pin in a hole of their choice on their voting card, than toss it into a shared voting box while hiding all the holes with their hand. After all have placed their votes, the box is opened and the votes are tallied. Finally, each player gets one of the voting cards and its pin so they are ready to vote again.

This tends to be faster and more efficient than using the voting cards method - especially if there are many possible votes - since every player discards (and later reclaims) a single "thing" per voting, rather than a thing for every possible option (like the six cards per player in your abstract example). 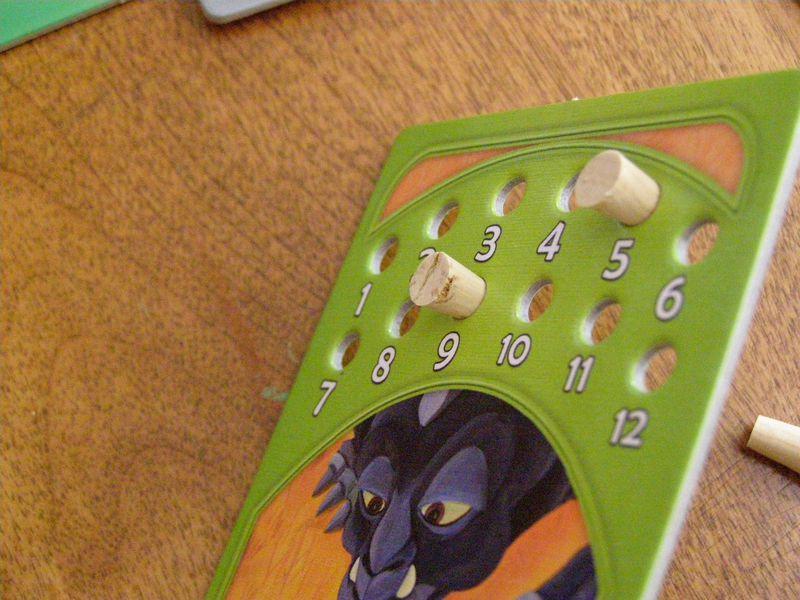 Alternatives to cardboard voting cards with holes and pin markers include:

I'm sure you can think of other implementations - this all boils down to the trade-offs of aesthetics, ease-of-use, durability and manufacturing costs.

Variant for influence as a limited resource

If it's important for your game that players can accumulate influence and that more powerful votes cost more influence - you can just use multiple markers to represent stronger votes (e.g. to vote BLUE 3, a player will place 3 markers on the BLUE row of his voting card). If the cost of a vote scales faster than its strength, just have multiple holes per strength. For example, if BLUE 1 costs 1 influence, BLUE 2 costs 3 and BLUE 3 costs 6, have one hole next to BLUE 1, two additional holes next to BLUE 2 and three additional next to BLUE 3. A player voting BLUE 2 will place markers in the first three holes.

In this variant, players get only the voting card back after the vote, with no markers (or just a single marker) regardless of how much influence they've secretly spent. Use player screens to keep the accumulated influence secret from the other players.

Finally, as a side note - if you don't mind the game to include an accompanying mobile app, it is relatively simple to create a voting app to secretly and quickly handle votes. This can be in addition to one of the methods above, or as the sole voting mechanic.

A potential solution, inspired by the way I've seen The Resistance played:

Each spendable influence "point" is represented by a set of three cards - in your example, Red, Blue, and Yellow. (I'm assuming the max number of outcomes is 3; change the details accordingly for more though it could get cumbersome with too many.) For each point you want to spend, you play a full set of three: one face down into the actual voting pile, and the other two face down in a discard pile. There is also a large stack of blank cards available, used to obfuscate how much influence you are spending. You may draw blank cards for free at any time, and any time that you may spend influence, you may also pretend to spend influence by playing blank cards into the piles as if they were normal influence cards: one blank in the voting pile and two blanks in the discard pile. (One thing a player can do under this system is prove that they are not spending influence by visibly playing zero cards; if you want to prevent this, you could pick a number and require each person to always play at least (or exactly) that many sets, either real or blank.) Redistributing cards in this system is easy: whenever a person earns a new influence point (after a vote, or however else they get points), they just take one full set from the bank.

Have a multi-compartment opaque box. Each section of the box has a slot (like a piggy bank). Each compartment represents a possible outcome of the event.

Each player is given some number of chips, possibly all the same, or possibly based on some other game element.

The box is put in the middle of the table, and the outcomes assigned (with cards, perhaps).

Each player, in turn, puts all their chips in the box. They can split between multiple compartments if they wish. This must be done secretly - either everyone turns their back / closes their eyes, or you have some cowl or similar.

You then open the box, most chips wins.

As no-one handles the box during the voting, it's unlikely anyone will accidentally find out how the vote is going. This would probably be most secretive with cardboard voting tokens in a cardboard box.

To expand on the skill cards, each player has their own deck of cards, from which they draw X (handsize will depend on the rest of your game to some extent) cards. They'll have various values of Red and Blue. Though you don't need to limit yourself to just 2 color. Indeed, having multiple colors, and considering only matching colors "points for", while any other colors are "points against" could give you more options, though in that case "points for" might need to be more valuable (or cards could have a For and Against value.)

Not the answer you're looking for? Browse other questions tagged game-design bidding or ask your own question.

36
Why is the strong 1NT so prevalent in Bridge?
13
What game mechanic can be used for evenly selecting other players but not yourself?
3
Confused with Bidding in Contract Bridge
15
Am I at legal risk if I use a mechanism from another game in my own design?
1
Poker auction - Precedence of hands
1
Mafia type variant with 3-5 players
0
Recommended strategies for Mercante in Fiera?
1
What if every suit were trump, and partners hated each other?
1
Mutual Identification mechanics in a deduction game
5
Why are Bridge's bid meanings public?