I'm trying to find the name of a Tree-themed Trick taking game I played a few years ago (say around 2014). Unfortunately I don't remember much more about it. I thought it was Arboretum as the artwork style was similar, but when I was trying to get more information I realised that Arboretum was published after I'd played this game, and the mechanics were totally different.

If I recall correctly the cards were in suits of species of tree, each card then had a value (say 1 to 10). I think players would have a changing hand of 5 cards, and you'd play to win a "trick" like in bridge, the player with the highest on suit card would win the round. But I can't remember why you would want to, or how scoring was done.

I've a vague recollection of the box art being green. And yes, I'm aware how lame that is.

Eternity is a tree-themed trick-taking game with green box art, though unless you're misremembering the year, it was published too late.

There are 9 pages of results on BGG when searching for this. Not too many have green boxes, but after a couple pages I realized there was no way for me to know for sure if it was the right one. Try clicking the link below though and look through the 9 pages of results. The results are filtered by "Trick-Taking" mechanism and published between 1910-2014.

Beyond that, not sure how else to locate this.

I've come to the conclusion that this must have been Arboretum all along. Trawling through the images section of BGG turned up the cover below. 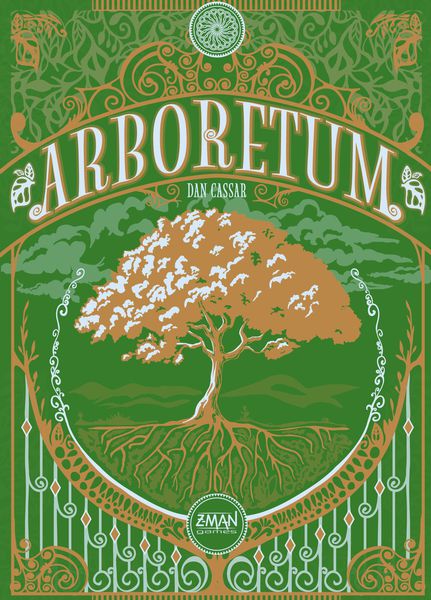 And it's the only thing with full on Tree art on the cards I came across following the link in another answer. I can only conclude we played some variant that I can't find any mention of on the BGG page, or a different game the owner made up using the same cards.

15
Identify Strategy Game with Chariots and Elephants
14
Help me identify this card game with secret, changing rules
8
Genre-mash up battle game
3
Game with a shopper on a bridge
3
Ancient Olympics Top Trumps Style Game
4
What is the game where you have to identify a person based on their features?
1
What was the game with a plastic Bigfoot that left footprint counters?
12
Help me identify an old family board game (from memory)
1
Identify game: Intergalactic United Nations