How to randomly choose a hex tile

I’m designing a board game which uses hexagonal tiles (hex[es]) to form the game area the players move about in. There is a single hex which is the players starting point, and one “layer” of hexes around that centre one. This is the starting layout: 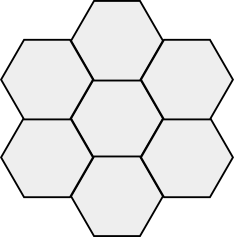 After this, players can add new hexes to the structure in any direction. The only rules are they fit in to the hex ‘grid’ and they touch an existing hex. Therefore they do not need to fully complete concentric layers, they can go one direction in a line of hexes for example.

I would like to introduce a mechanic that targets a random hex, and this is where I’m struggling to come up with a good way of determining that random hex.

Ideally, the method should give an equal chance for any hex to be targeted; and it should only use components which are generally found in board games. It would be very easy to do this with the addition of a mobile phone, for example, but I would like to try and keep this classic. Common components are items such as dice, spinners, tokens, cardboard components, etc. Feel free to suggest anything that might help. The other requirement would be that the process is not overly complicated - but as that’s subjective I’m open to anything.

TL;DR Is there a method of choosing a random hex from any number of hexes, in any formation, using common board game components?

Create two sets of tiles. Whenever you add a tile to the board, add its copy to a drawing bag.

Now whenever you need a random tile, draw it from the bag.

This technique requires all your tiles to be unique. If they are not unique, and can't be given a unique identifier, then create a double set of numbered tokens, and assign a number to each tile as it is placed.

StartPlayer mentioned using a deck, which is also an excellent suggestion. The two options have slightly different use cases, so which one you choose should depend on how you need them.

Draw bags are better if you are frequently adding items between draws, because it is easier to shuffle a bag, especially if there are only a few items.

On the other hand, a deck is better if you need to remove specific items in a manner besides randomly drawing them, because it is easier to search a deck than a bag.

There is a print and play on BGG called Beehive (full disclaimer I'm the designer).

Throughout the game I needed to select random hexes. This was achieved by each hex having a unique number and a deck of cards with each number as well. Throughout the game cards would be removed and added back to the deck as required. This meant is was always possible to randomly choose any hex. If each of your hexes is numbered and placed you can add its matching card to a deck when you need to choose one randomly.

If you implemented a similar numbering scheme that was printed on the hextiles, you could then have 3 dice that are rolled to determine which random hex is selected (like how d% is two d10s, one for the tens place and one for the ones place.) So a roll of 2, 6, and 1 would be hex number 261. If the hex does not exist on the board, reroll.

18
Players who can't seem to follow the rules -- What can be done?
12
How can I prevent players from cheating on their stats that carry between games?
6
Mechanism to balance all game stages
5
Dividing up Hexagonal Board Tiles
5
Board games involving players' consensus for who wins?
9
How can I refer to specific hexes on a hex board?
1
How to implement numerous resources in a clean efficient way
3
Revealing an effect of a card after player makes their choice
3
Implementing Hidden Opposing Player Votes/Bids with Variable Values