What game is this meeple from? 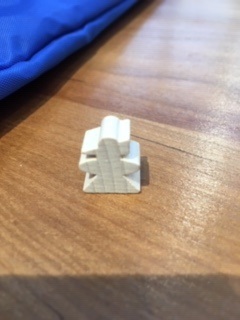 This meeple was found at a bar where board games are often played, but nobody could identify what game it was from. It appears similar to a standard meeple, but with a flat bottom (rather than two separated legs) and a diagonal "hat". Any idea what game it could have come from?

EDIT: Except for the solid base (no leg split), as The Chaz 2.0 noted in the comments, it looks like a farmer child from the Wooden Farmer Set for Agricola.

3
Identify board game played as a child featuring cute monsters
5
A board game with astronauts?
2
Game With Space Battles
5
Game where you guess whether something is true
9
Looking for name of very old board-type game
26
What game did these black and yellow dice come from?
8
What are the rules to this “CheeseGame”?
2
What game is this? 8x8 wooden grid with 2 sets of 9 marbles
4
What is the game where you have to identify a person based on their features?