How balanced are the character powers in Colt Express?

Colt Express (rules) has six player characters with different powers. After a few plays it seems like some of the powers are significantly better than others. I would like to know if there are any stats showing how each of the characters rank?

Obviously weaker players can gang up on the strongest to mitigate this, so maybe two player results would give the fairest comparison. The downside of two player is that there's probably less games played (Colt Express isn't as good with two) and the rules are slightly different (each player has two characters).

If one compare the base power, we can easily conclude that Ghost and Doc got the easiest to use powers, since it works no matter what. Belle has an interesting power that needs someone close, Cheyenne Django and Tuco changes how a basic card is played. Cheyenne is, statistically, the one with the "hardest" to use power, since it only works for one card in her deck AND only for a type of loot.

Belle's power is usually considered powerful, because it makes her hardest to hit, on average, with a lot of players. On 3-4 players game, her power is harder to use, but this power can save you and punish your opponents, paving your way for success.

Ghost's power is psychological warfare at it's finest. It works for every round, it hides the first card of each round... On a game where you try to predict opponent's move, it's horrible to face. The power doesn't help you "win" by itself, with bad hands it can also do nothing, but the bluffing abilities of this power is incredible - if you can pick your character and dislike mind games, pick him, facing him is not for the fait of hearts.

Doc's power is bland. You draw one more card. Every turn. That's boring, but practical. You'll more often than not get the card you need and not be too crippled by bullet but that's it. Your opponents won't see you play differently, because you won't. You have no specific strength, no trick, it's just the cards and their stated effect. Surprisingly effective, he's never a bad choice and id perhaps the easiest character to play.

All in all, I think Ghost is the best, but depends on your group and how well you can bluff. With very large groups, I tend to go for Belle, because her power is much easier to trigger and well, it helps. Doc is the one I pick if I know people won't buy bluffs and are prone to mass shootings.

With one of the expansion pack, there is a chinese kung fu girl available which can move horizontally and vertically on the same move (well it's a bit more complex actually). She's VERY good because of this, her movements are hard to predict, and a skilled player always get where he wants, faster than anyone else. If expansions pack are included I'd vote for her.

There is a Boardgame Geek thread here with a poll. The poll results as of the moment of writing are shown below: 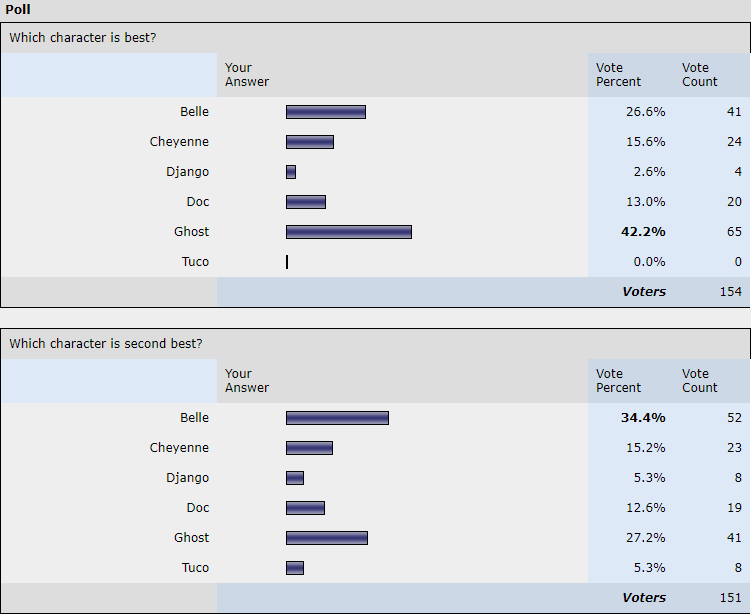 It appears that many players regard Ghost and Belle to be most useful chars. Similarily no one called Tuco a most useful one. Combining with your own experience and my observations, it appears that Ghost, Belle and Cheyenne are better than Doc, Django and Taco.

However, be aware, that sometimes player preference is subjective and does not reflect the "real" balance, on the other hand, I do not think that it's possible to answer this question objectively.

We played with 4 players and have decided to ban Belle. She barely (I believe even never) got shot and won very easily. The group also played with more players and said it balanced her, so it may depend on the number of players, but Belle was nuts with 4.

Not the answer you're looking for? Browse other questions tagged untagged .

2
How to solve problems with the Invisibility power
3
Kingsbridge Scarlet: trade 1 cloth for 3 VP
0
How does the Stun mechanic work in this scenario in Maximum Apocalypse?
2
How does Zap work in "Chameleon the game"?
0
How are storage costs computed for RMUs and FIUS?
0
What are the rules to the card game “Queenie”
1
Where are the components listed?
1
Does anyone know how to play the Shithead Card Game?