Abilities with the "until" clause and the stack

If an effect or ability (are these two different cases?) lasts "until" a certain effent occurs, does this "delayed" condition use the stack? For example: 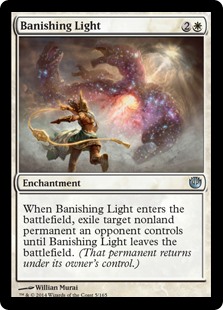 I remove the Banishing Light is there a trigger placed on the stack afterwards? Or is the permanent placed on the battlefield while the spell/ability which removed the banishing light resolves?

If Banishing Light leaves the battlefield, the card it had been exiling returns immediately.

An effect is just something that happens because of a spell or ability. Only spells and abilities go on the stack. It's important to separate spells, abilities, and their effects.

When the ability created by BL has finished resolving, it has created two effects: One that exiles the target, and another that returns it later, when the condition is met. Both happen without them using the stack. Only the triggered ability from BL entering the battlefield uses the stack.

12
Can a well-timed Twisted Image kill a player using Tree of Redemption?
23
Do creatures that enter the battlefield at the same time see each other enter?
14
How does Perplexing Chimera work with multiple triggers on the stack?
9
When a creature is summoned but still on the stack is it considered a permanent?
7
Can abilities that trigger when a permanent becomes targeted trigger multiple times from the same spell?
4
Where do Delayed Triggered Abilities live?
1
How would Solidarity of Heroes work with Heroic counter abilities
4
Ninjutsu ability and the stack