What does this oval symbol at the bottom of Magic cards mean? [duplicate]

Ask Question
Asked 2 years ago
Active 2 years ago
Viewed 1k times
2
This question already has an answer here:
What do shiny ovals mean on Magic the Gathering cards? (1 answer)
Closed 2 years ago.

This is not related to game play as far as I know. Creatures such as Shivan Dragon, Victory's Herald and Glyph Keeper, and even enchantments like the double-sided Search for Azcanta, there is this shiny part near the bottom of the card. The only link that I have is that it is linked to rarity, because only cards that are rare and above have them, but not all of the cards that are rare and above do have them, and it is not related to premiums. Can anybody help me know what it is?

These are holograms, to prevent forgeries. They were introduced as part of a new card design in Magic Origins (2015):

The second (and current) overall frame change was unveiled in Magic Origins. It was a more subtle change, adding some more (non-game related) information on the bottom of the card, which received a black colored background. Also, rare and mythic rare cards received a hologram sticker to prevent forgeries.

Compare Shivan Dragon from M14 with the one from M15: 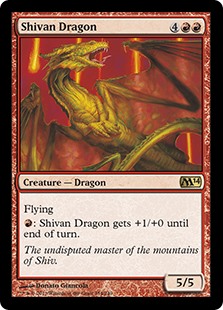 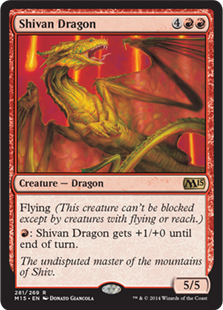 16
What do shiny ovals mean on Magic the Gathering cards?

19
Are cards of the same “rarity level” really equally rare in MTG?
18
Why do cards have different rarity levels in Magic: The Gathering?
14
Where can I get custom Magic: the Gathering cards printed?
26
Ways to handicap in Magic the Gathering?
8
Does Welcome Decks 2016 contain cards that aren't reprints?
1
What does the expansion symbol of From the Vault: Transform mean?
2
Can't find the specific price for MTG japanese cards
5
What is the correct grade of Magic cards?